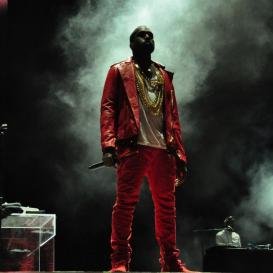 Twitter is a great way to waste time. After you've managed to exhaust the enjoyment out of your newsfeed, there are some 300 million different users left for you to stalk. To save you the time and energy required for finding a useful candidate, I can expertly suggest you settle for Mr.mogul himself, Kanye West.

In January of this year, Kanye West became wrapped up in a Twitter fight with Wiz Khalifa. The rant began after Wiz attacked Kanye's album title change to Wave, saying that imprisoned rapper Max B is the "wavy one". Since then, Kanye deleted over 30 of his posts, but the debate sparked a new Twitter storm for the artist, who has been flooding his feed during the flurry of noise around his new album, Life of Pablo.

If for some reason you're looking for funny tweets in an article rather than on Twitter itself, I present to you, in no particular order of greatness, 20 of Kanye's most outrageous tweets. Welcome to the era of cross-platform journalism.

Number one has been chosen because it's the most indirect and aloof apology out there. For those amongst you who are less educated in the world of pop-culture, it is referencing his misunderstanding of what Wiz meant by "KK". It was quite the popcorn-grabbing show.

People wanted me to tweet again well here's some tweets!!!

A man who always delivers what the public wants. We can only thank him for blessing our timeline.

Feels good to be home pic.twitter.com/rhKN9xaC1F

Ah yes, at number three we come to the first tweet of his that makes absolutely no sense. Although, this could be his way of telling us he is, in fact, a giant baby.

Only positive vibes here, forget self-help books, exercise and eating right, the route to all happiness is on this Ultra Light Beam.

Kanye's ego is so big even he can't cope with it.

We have to lower the price of textbooks…

This tweet makes the top not only because it's a simple yet important and poignant point which highlights the expense of American education, but also because it's so beautifully ironic.

@kanyewest "We have to lower the cost of textbooks" ……. pic.twitter.com/FeZl6OKY7c

They couldn't help but make a point about the expense of his clothing collection.

Shut the fuck up and enjoy the greatness.

"When someone keeps talking over you".

I know I confuse you guys sometimes but please bare with me.

Such an innocent and simple request. Something you might say in the middle of a university presentation that just isn't going your way because you stayed up all night to finish it and forget you accidentally put the word "fuck" in their because you were so tired and thought it was funny in your sleep deprived state. (yes, that really did happen to me).

"Furs and houses." Plural. In case you got it twisted.

but I need access to more money in order to bring more beautiful ideas to the world.

But it can't fund his album-making. May we all give to the fund of Kanye so we may be given the gift of his all-consuming talent.

…on another note, can brah be the girl verson of bruh???

Seriously though, can it??

Forget fancy meetings in big board rooms with free croissants, email tennis, awkward group phone calls, first class flights and meeting for a coffee in an over-priced artisan cafe in London- Twitter is the new place for business deals to be made.

Only Kanye will try and gatecrash your birthday through Twitter.

I'm practicing my Grammy Speech. I'm not going to the Grammys unless they promise me the Album of the Year!!!

HAAAAAAAAAAAAAA FUCK ALL THE HATERS PUT YOUR MIUTHERFUCKING FIST IN THE SKY RIGHT NOW!!!!!!!!!!!!

HIS HYPE IS SO REAL I WILL NEVER BE THIS HYPE.

That makes no sense!!! We give the iPad to our child and every 5 minutes there's a new purchase!!!

not smiling makes me smile

I connect with Kanye on a spiritual level.

HAD TO ALL CAPS THIS!!!!!! NO MORE RULES…. MAKE YOUR OWN RULES… ok now back to finishing Pablo

BE YOUR OWN BOSS. Who needs a top tip article in a women's magazine on how to get ahead in the men's working world when you have Kanye?