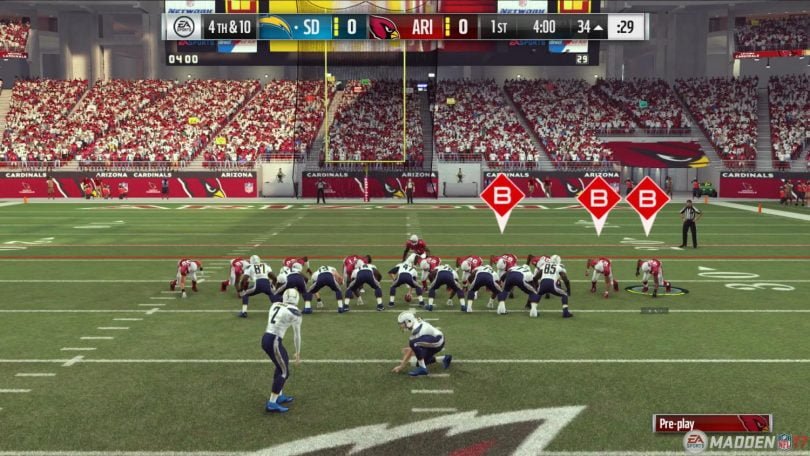 At first glance, it’s easy to think Madden 17 lends credence to the idea annual games are the same product every year with some minor cosmetic changes. However, I recently got the chance to spend some time with the game prior to its release, and Madden 17 is so much more than that. Subtle but thoughtful changes make a real difference to the gameplay and the game has become a much more enjoyable experience.

I just realised I basically do have Madden 17 early… I own Madden 16.

If you’re just jumping into a game, the most instantly noticeable difference from last year’s entry is the new commentary team. The repetitive voices of Jim Nantz and Phil Simms was one of my biggest gripes with last year’s entry in the franchise and made longer play sessions tough to stomach. This year’s team of Georgia Tech’s Brandon Gaudin and Fox Sports’ Charles Davis breathes some fresh air into the game. The play by play announcing is much smoother and continuous, replacing the often jilted and stop-start commentary with context-sensitive dialogue. A game designer at EA told me that most Madden games include less than 50 hours of commentary. With the on-disc content and day one patch, Madden 17 includes over 500, and will regularly have more added via updates. Although I didn’t play long enough to encounter this at play, hopefully this means less dialogue repetition.

It’s pretty clear with this game EA are really going all out for an immersive experience. Aiding the improved commentary in this endeavour are the new cinematics. Dozens of new animations as players run and battle on the field, as well as celebration and sidelines shots, add to the theatre of the game. EA say they want to make a game that goes deeper than watching a football match while providing the same realism, and the live game style camera angles add a layer of authenticity.

Improvements have also been made to the core gameplay that makes a noticeable difference if you’ve recently played Madden 16. If you run zone defence plays, instead of staying in their zones until the ball is thrown, defensive backs will react to routes that pose a threat. And it really shows. I swatted more passes in two games than in an entire season of franchise mode games in the previous game, including a spectacular pick six caught in my own end zone. Gap assignments make AI players a lot more effective at stopping runs, and on the other side of the ball, an indicator showing the direction you’re running is a thoughtful touch that helps you hit the gaps in lines.

If you’re struggling calling plays, the new defence play calling system lets you pick a type of play you want to stop based on what you think your opponent is going to do, for example and outside deep pass or an inside run, and gives you simplified plays to stop that offensive play. It’s a really great system to help you learn defence and the game. That said, offence is definitely still easier than defence; in one of my games, neither of us being fantastic Madden players, the final score was 38-20.

Another problem I always had with previous Madden games was the simplification of special teams. Kicking was so dumbed down and defence so ineffective it was impossible to miss a field goal or misplace a punt. Now however, having to aim kicks while engaging in a genuine quick time event adds a real challenge. Layered on top of this are intriguing fake plays, meaningful defence that can sometimes block kicks, and more involved run backs, and special teams becomes as huge a part of the game as in the NFL.

As well as these gameplay changes, there’s deeper stuff that I didn’t get to see in my brief play session. Huge additions to Franchise mode see the introduction of practice squads, deeper character creation and the new Play the Moment feature. Play the Moment allows you to simulate through matches, watching the game unfold and being able to jump in at any moment to take control. According to EA, this could condense games down substantially, allowing players unable to engage in marathon sessions to get through whole seasons in a few days.

Additionally, the new chemistry mechanic in Ultimate Teams is going to change the game mode, making the game almost an RPG according to EA game designer Clint Oldenberg. Raising your team’s chemistry level allows upgrading players, units or a whole team, and leads to enabling more complex playbooks and formations.

That Madden’17 drops 6 days before the fall semester starts .. ??

Despite a couple of unavoidable buggy moments with the game’s physics engines (at one point I threw an interception that the cornerback caught with his hand through the receiver’s elbow), I found very little wrong with Madden 17. The new gameplay features build on an enjoyable package, to create a great game that provides a fun and immersive experience. I’m excited to get my hands on the game and try out the new features because I see no reason this game won’t be excellent.

EA Sports’ Madden 17 releases on August 23rd on a range of platforms.