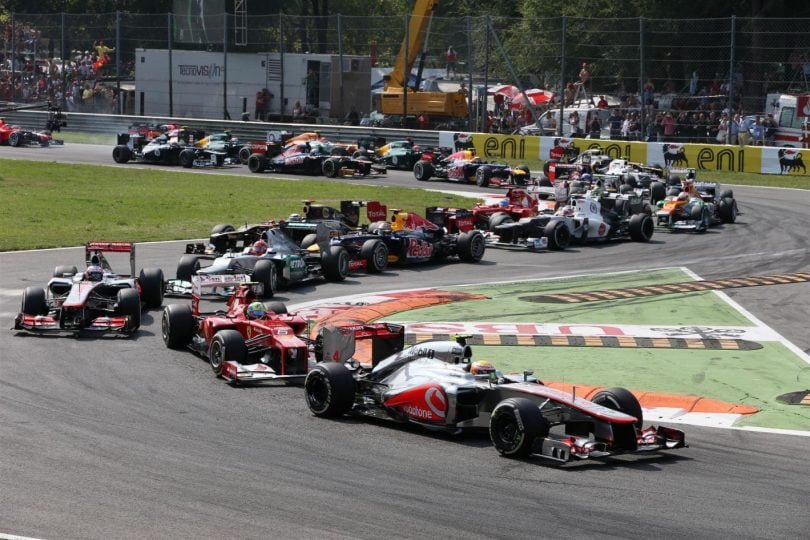 Lewis Hamilton will start the Italian Grand Prix from pole position after taking his pole since the Spanish Grand Prix back in May.

Lewis Hamilton will start the Italian Grand Prix from pole position after taking his pole since the Spanish Grand Prix back in May.

As you would expect, it was the Mercedes powered cars that enjoyed their Saturday with the first three rows on the grid occupied by cars with a Mercedes engine.

After missing out in free practice three Nico Rosberg did well to join teammate Hamilton on the front row. Fresh from their coming together at Spa, you would imagine that the Mercedes garage will be watching with one hand covering their eyes on the run down to turn one.

Behind the two Mercedes Valtteri Bottas and Felipe Mass occupy the second row with the McLaren pairing of Kevin Magnussen and Jenson Button start from the third row.

Whilst seventh place for Fernando is disappointing, middle of the top ten was roughly where the prancing horse expected to be ay best. Whilst Alonso got the most out of his Ferrari at the teams home race the same could not be said for Kimi Raikkonen.

The Fin failed to make in into the top ten shootout and lines up in twelfth. Whilst only setting a time good enough for twelfth place Raikkonen after Daniil Kvyat’s ten place grid penalty.

Although Monza should play into the hands of Mercedes runners, Force India had a bad day at the office. Nico Hulkenberg will start the race down in fifteenth whilst Sergio Perez rounds up the top ten.

Whilst Red Bull was expected to struggle due to their Renault engine both Sebastian Vettel and Daniel Ricciardo made their way into Q3. In a rare sight Vettel managed to out qualify Australian Daniel Ricciardo by .3 of a second.

It was a difficult session for Romain Grosjean and was limited to just five laps. The Lotus team lost the majority of Q1 as the team struggled to fix a fluid leak.

Whilst Mercedes locked out the front row there is a serious threat coming from behind in the form of the Williams. If you take into consideration the long run pace of Rosberg on Friday afternoon, Rosberg has a real chance of winning.

With one stop looking like the way to go Rosberg will have to make a pass on track. We all know how that ended up last time.