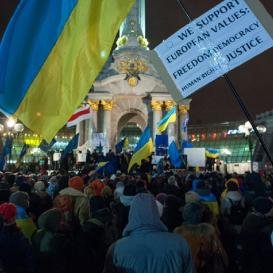 Having only declared independence in August 1991, Ukraine is still a pretty young country in terms of having a democratically elected government. With the Orange revolution that happened in late 2004/early 2005 and the more recent Maidan revolution in late 2013/early 2014 along with a Russian separatist uprising in the east of the country you can be forgiven for thinking that the country is in trouble.

Considering that the Ukrainian government is trying to reform (more on that later), it takes time, and a lot of time is needed for the changes to not only be implemented, but to also take effect. This is made more difficult with the levels of corruption that Ukraine has. It ranks at 142 out of 175 according to transparency international, meaning it will take years to sort out and, with the residual distrust from the days of the USSR, there will have to be a visible change for people to believe it has happened.

This is an incredibly complicated situation so I am going to keep this piece to what caused the Maidan revolution, the revolution itself and some of what has happened in Ukraine afterwards.

The protests were originally triggered on the 21st of November 2013 when the then President Victor Yanukovich failed to sign an agreement to bring Ukraine closer to the EU and instead signed a deal with Russia. Becoming closer to Europe had long been an aspiration of the Ukrainian state but one week before the deal was to be signed the government announced it was instead looking into setting up a joint commission which would lead to closer links between Ukraine, Russia and the EU.

This U-turn was a huge shock to most people, not least the EU since discussions had been going on for months. One of the EU’s requests was for the then imprisoned opposition leader Yulia Tymoshenko to be allowed to travel for treatment. The EU believed that her trial and imprisonment had been politically motivated and had demanded that she was released before the agreement was signed.

People (mostly students initially) went to Maidan on the 21st of November after journalist Mustafa Nayyem posted on his Facebook page calling for people to gather in independence square. Over the next few days similar gatherings happened in other cities such as Lviv, Luhansk, Kharkiv and Donetsk.

“Even though we called Euromaidan ‘Revolution of Dignity’ we never really meant it to be revolution until bloodshed started in January 2014.” Journalist Otar Dovzhenko said.

On the 30th of November there were violent clashes when Berkut officers (a now disbanded elite riot policing unit) violently attacked protesters injuring many in an attempt to clear the area. Many activists took refuge in St. Michaels Monastery.

The people came back more determined than ever. “People’s attitude to Maidan changed.” Otar Dovzhenko recounted. “First week of the protest were about European integration of Ukraine. It was the period of happy peaceful meetings, dancing and singing.  All that happened after November 30 night was because people were sick of Yanukovych, sick of corruption and brutal violence.”

On December 1st protesters returned to the square and set up tents, a stage is built and barricades were set up. What kept them going?

“I lived in a country I didn’t know. I lived in a country, I dreamt to immigrate from. I didn’t see people, who were alike me. And the president of this country just chose my future for me.” Activist Ivona Kostyna told me “My mother made me go back there on the 1st of December. I saw the crowd and I felt at home. Where I belong. For the first time. I knew, that for us, at some point, there was no return.”

The protestors stayed and in January the situation became violent. The violence continued into February when Yanukovych fled in the middle of the night and he was ousted as president in February.

In the mostly Russian speaking East of Ukraine there was a referendum (which the Ukrainian and international community called a sham) that resulted in the Crimean peninsula being declared part of Russia. Since 2013 there has been a conflict between Ukrainian soldiers and Russian separatists.

According to a government spokesman: “Donetsk and Luhansk regions as well as the Crimean peninsula are territories of Ukraine. Our political, diplomatic and military efforts directed to restore the territorial sovereignty of the state. Ukrainian President and other officials use every opportunity to present more evidence to the international community of Russia’s direct involvement in the illegal annexation of Crimea and military conflict in the East.”

In May elections were held and Petro Poroshenko was elected as president. Known as the ‘Chocolate King’, Poroshenko is an oligarch who owned the largest confectioners in Ukraine, Roshen (he sold his stake in the company last year). So, nearly two years later what do people think?

“Poroshenko was the only right choice because Ukrainians thought him capable to stand against Russian invasion. And capable he is, but it’s not enough now.” Said Otar, “Ukrainian society requires real reforms and wants to see the results immediately.”

While it is understandable for the public and observers to wish to see reforms, a complete and utter change in the entire country will take time. It has only been two years since the revolution, why are people so willing to complain about the lack of progress?

Kyiv based blogger Lucy Sohryu gave a possible suggestion “Unreasonable expectations, maybe? After all, even successful East EU countries like Poland took ten years to crawl out of economic crisis and establish democracy and rule of law. Ukraine neglected both for the last 25 years, and with the war going on we’ve only just begun to get our house in order.”

Significant change takes time, and to completely restructure an entire nation will need to include a societal shift. The battle against corruption is one of the big issues Ukraine faces and since the revolution the National Anti-Corruption Bureau (NABU) and anti-corruption prosecution office have been established which a government spokesman described as a watershed with the corrupt practices of the past by involving prominent experts and civic activists in the process.

“The state budget for 2016 also reflected emphasis on tackling corruption as both new institutions gained separate funding, which makes them financially and politically independent.”

In terms of actual visible changes to the government, the police service has seen a significant change with the disbanding of the Berkut unit and a major increase in the number of female police officers (up to 25 per cent of the total force).

These changes are definitely positive, and, if you read the aims of politicians, then there is a genuine drive to transform Ukraine. Fortunately, there seem to be people in power who want to make changes, but as with all transformations, only time will tell.