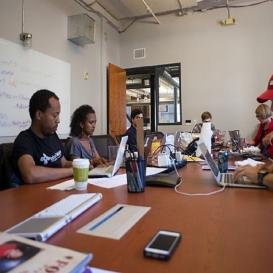 There are millions of blogs from around the world covering various topics, from online diaries to style guides, book and film reviews to politics and news stories. Every subject is covered in nearly every country, as long as you have an internet connection you can most probably access at least some of the information.

‘Netizens’ play an important part in the spreading of news and can go into more speculation that print media as they are not bound by any organisation, because of this bloggers have become a thorn in the side of  some regimes and these governments have retaliated with force.

Recently there has been outcries for the release of the Saudi blogger Raef Badawi who was imprisoned for ten years and also to receive 1000 lashes for promoting free speech and political debate online. He has received the first 50 lashes but doctors have ordered the next 50 to be postponed until his wounds have healed enough.

In Russia, bloggers who get more than 3000 daily hits have had to register with the mass media regulator, allowing the government access to their information and making anonymity impossible.

In the UK, a blogger was visited by the Police and asked to remove a tweet criticising the political party UKIP, and a document leaked by Edward Snowden has revealed that GCHQ regard journalists as a threat to national security.

In Australia the state of Victoria’s Supreme Court imposed a 5 year gagging order on all citizens and news outlets from reporting on a case of alleged bribery concerning government officials from several Asian countries.With cases like the above, how concerned are global governments with the power that bloggers and users of social media can wield?

Being able to get information out into the world quickly is the biggest advantage that netizens have. Yet the lack of regulation and government control is a concern for authorities as they no longer have the control over information that they once did especially in a country where the internet is a more trusted source of information than the mainstream media such as Saudi Arabia.

Transparency in a government is vital for public trust and when governments try to repress the flow of information they are sending a clear message out. The likes of WikiLeaks and Edward Snowden and the reaction to the information leaks highlight just how important this.

With people like Raef Badawi being punished for promoting and encouraging debate we cannot sit back and watch those who speak out to be targeted and punished simply for voicing an opinion. Netizens are just as important as mainstream journalists and governments should be doing more to protect them.