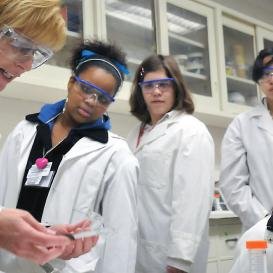 I was fortunate enough to have completed my science journalism Master’s degree at City University this year, and to have been taught by one of the most ballsy and formidable science journalists in the world. Yes, she’s female, and yes, she recently outed a Nobel laureate as an ignorant sexist. I’m talking about Connie St Louis who took a stand at a conference in South Korea this month when biochemist Sir Tim Hunt boasted about being a self-proclaimed chauvinist.

Women should work in different laboratories to men, he claimed, because men fall in love with them and make them cry, or something to that effect. I’m not going to give his ill-conceived, outdated remarks any more publicity.

Nevertheless, everyone loves an alternative opinion. After the backlash about his comments in the press and all over social media, there has naturally also been a great deal of support for this man. First came the Richard Dawkinses and the Brian Coxes, spouting about Sir Tim’s credibility and how he should not have resigned from his honorary professorship at UCL over his comments. In the world of academia, it seems to be overlooked that someone can be both academically brilliant and socially oblivious.

Then came the journalists who wished to point out how Sir Tim was merely joking, and his speech was “warm and funny”. This triggered a manhunt, to publicly criticise St Louis herself, condemning her personally and professionally.

I have read a lot about this saga over the past few weeks, but I haven’t felt the need to involve myself until today. I have read several misguided and accusatory things, including an article claiming that Connie St Louis can only get away with expressing her opinion about Sir Tim Hunt’s comments because she is both black and female. I just couldn’t let the irony slide on this one.

From what I gather, many believe that Hunt’s right to freedom of speech is more valid than St Louis’ right to express herself being offended by him. I’m afraid this makes zero sense to me. When Sir Tim declares himself a sexist and belittles women in front of a predominantly female audience, he is exercising his right to free speech. When St Louis outs him for it, she’s being vindictive and deserves to be investigated for being an unprofessional liar. How nice it must be to be a white, middle-class male in a profession that rewards you for being so.

St Louis took to social media because she believed what Hunt was saying was wrong, plain and simple. She used this as a starting point and the tip of the iceberg for the bigger picture: how undervalued women are in science. She did not “hound” Sir Tim, she merely stated what she heard on social media, which was picked up by several news outlets.

Connie St Louis is an opinionated, highly intelligent woman and like most of us journalist types, she lives in an office of organised chaos. She has admittedly frustrated her students like me by having so many ideas she can never really stick to just one for very long. People like me who have been lucky enough to be taught by her will know that her electronic CV means fuck all and her experience and expertese speaks for itself. Nevertheless, this is entirely irrelevant to the matter at hand.

The Daily Mail is enjoying going after St Louis, claiming that her CV is wrong and thus nothing she says can be taken seriously. Not only is this classless, it’s shoddy journalism. If I was as busy as Connie St Louis, I would have hung up on you too when questioned about it. Excuse her for not indulging you in your petty woman-hunt.

St Louis may be many things, but she’s not a liar and she has definitely not ever taken any liberties because of her skin colour. To say she is getting away with her comments because of her colour and sex is not only moronic, but it completely devalues the whole point of journalism.

If you don’t wish to be “stitched up” as that well respected journalist Piers Morgan tweeted recently, then don’t be a bigot. It’s as simple as that.

Going after St Louis misdirects from the real problem, which is that women have been undervalued for too long and men think that it’s appropriate to make sexist remarks in front of them, whether they be “joking” or otherwise.

Instead of being supported, journalists are looking for reasons to diminish her opinions, which is everything that’s wrong with the current media. I must remind you that Sir Tim Hunt is still unapologetic about what he said.

Ultimately, Sir Tim will never be out of a job. When the dust settles, he will probably be enlisted by the legendarily male-worshipping Royal Society where he can exercise his sexist beliefs from above in a comfy, well-paid position. To be honest, I can’t think anywhere better for him to continue his career.

One last thing. To anyone claiming that I should be asking for a refund for my Master’s course, I think you should re-evaluate your own career choice as a journalist. Perhaps if you had been taught by someone as inspiring then you would be able to construct a more sound and revelant argument.