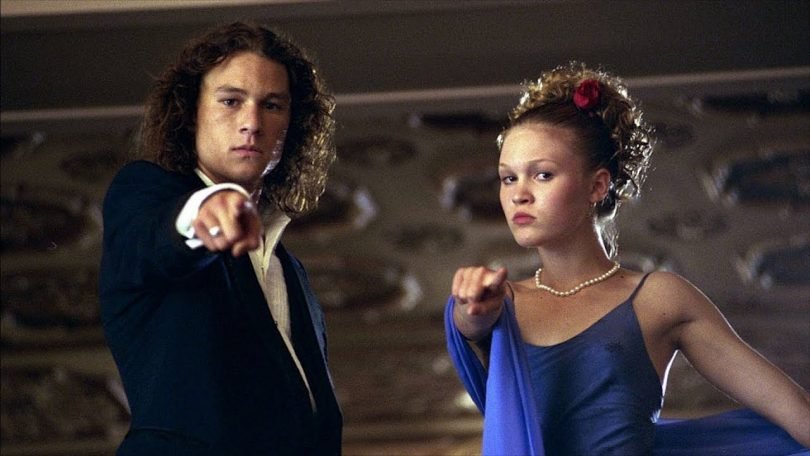 The 1990s was a strange time. The decade deserted by all fashion sense. It was an era of trading Pokemon cards in the school playground…got, got, need…watching two glorious failures of the England football team, Gazza, Bartmania and Britpop. Among this clutter of pop-culture junk came another glut of great teen movies. Okay, so they may not live up to the hype of the previous decade but there was still some silly, saucy and surreal goings-on in Cinemaland. Here are five to get your nostalgia flowing.

Okay, so it’s a horror/slasher flick. It still features people of teenage years only in a more gruesome setting. A mysterious murderer marauds around in a mask (based on a painting by Edvard Munch, no relation to Monster Munch which was also big in the 90s), killing High School kids with seemingly no motive. The major object of the madman’s intentions is Sidney, whose mother was found dead in suspicious, horror movie surroundings. What helps it to stand out is the fact the characters are completely aware of what to look for in a horror film- and then do it anyway. This is the sort of film that would have horrified parents, particularly of the boomer generation, as its depiction of gore and psychosis, Drew Barrymore’s exposed innards and a woman getting severed in a garage door made for pretty grisly viewing. The world rubbed its teenage hands together and said “yeah, man, I’ll watch that.” A staple of the decade.

Get on your broomstick, get your virgin younger sibling to light a black candle, dance to Screamin’ Jay Hawkins and you get this quality classic. Released in 1993, a very good year I should add*, this is cult viewing on a large scale. Without the hilarious performances of the three Sanderson sisters, it would be just another flimsy attempt at making a film about the witches of Salem. What’s not to love? It has a talking cat, a couple of school bullies who couldn’t be any more 1990s if they tried, an annoying little kid, a book of spells that has an actual, moving eye and all blended together into a nice, warm, cinematic stew. You know it’s good versus evil but, secretly, a part of you wants evil to win.

*the author would like to remind you that he was born in 1993, on the actual UK release date of Hocus Pocus, any other event of 1993 is irrelevant.

Obviously, this is a film about mind-altering substances and not strictly featuring, or aimed at, a teenage audience. I think its message should be read loud and clear to people in their very late teens, the legal age ones. It’s about living for the weekend, making the most of the boring week at work and then letting off more steam than a whistling kettle with your mates on a Saturday night. At the same time, it’s about relationships, friendships, Danny Dyer screaming ‘alright bruvaaaaa’ down the phone.

An iconic indie movie of the decade, you might think I’m mad for putting it in here but it shows the major difference between an 18-year-old British lifestyle and an American high schooler. They are chalk and cheese. Who decided chalk was the opposite of cheese, by the way? If you’re easily offended then you should still watch this, you might learn a thing or two about an alternative culture to the one across the Pond.

Yes, we all know it’s based on Shakespeare, there is no escaping him is there? It’s a bit of a chick flick but there’s nothing wrong with that. It’s a love story. It’s the tale of people very different who have a common goal, they are human and they need to be loved. One of the best things about this, like a lot of films, is the soundtrack. I want you to want me, et cetera. Heath Ledger and Joseph Gordon-Levitt are in it, as well. I rate both. To put this one simply, Julia Stiles is obsessed by English as everything I see her in features a literature class or something. It deserves to be watched several times, no matter how much people say they dislike it, I doubt that’s true. 1999 was full of fantastic festivities.

Oh yeah, it’s The Taming of the Shrew that it’s based on. That Billy Shakespeare just keeps coming up, doesn’t he?

It couldn’t be a 1990s countdown without a slice of one of the funniest films ever made. A group of High School seniors make a vow to lose their virginity at prom. I think there is every sort of American character in this movie- the jocks, the nerds and all that- but at its heart is the story of the strength of friendship. It is a lot more schmaltzy than you might think, it is well hidden by Jim and his funky dancing, Oz and his singing like a songbird and so on. A thumping soundtrack of 90s ‘college’ tunes featuring the likes of Barenaked Ladies and Blink 182, this is Americana with the laugh-out-loud jokes and japes blaring out loud and clear. Again, it’s the sort of film that it’s generations parents would have thought rude and mind-numbing. There is everything funny about explosive, laxative-led toilet humour. Over twenty years on, it remains a sort-of bible for teen comedy.

So, once again, I invite you to add your own. It’s a very popular genre, rich in ridiculous scenarios and belly-laughing situations. There is also real love and heart behind teen movies. Maybe not so much in this decade but, as we moved into the 21st Century, the world was about to explode in technology and social media. The 1990s were the last stand for traditional communication and playing outside until the street lights came on.