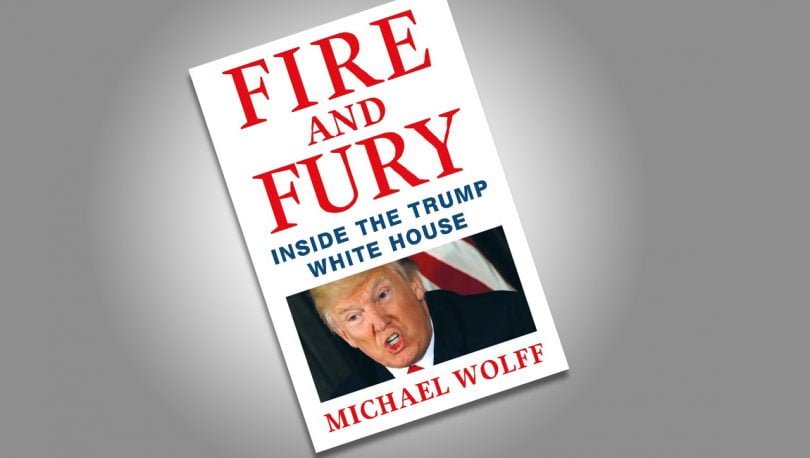 Michael Wolff’s non-fiction book Fire and Fury hit the shelves on January 5th, 2018, and quickly became the object of controversy, being talked about by the general public and members of the White House due to the topics covered in the book — the Trump administration.

What is Fire and Fury about?

Fire and Fury focuses on the current American administration and tries to answer some of the most talked about questions concerning President Donald Trump, former White House chief strategist Steve Bannon, and former FBI director James Comey. In this book, Wolff explores the relationship between the president and his staff, as well as the reasoning behind some of the most controversial decisions and claims he has made.

The title chosen, Fire and Fury, serves to further illustrate the image portrayed in the book of a chaotic and turbulent Oval Office where most of Trump’s close ties believe he is “unfit for the job.”

One of the most controversial aspects of the book is the alleged comments made by Steve Bannon where he questioned the president’s mental health and ability to carry out the rest of his four-year mandate.

How was the book written?

In his pitch to the White House meant to gain cooperation for the book, Michael Wolff gave a working title that implied its content was favorable and sympathetic towards the administration — The Great Transition: The First 100 Days of the Trump Administration. Despite Wolff’s past works, in particular the last book he published which looked critically at Trump’s confident Rupert Murdoch, his pitch was accepted.

As the author was writing the book, he had the opportunity to listen in on selected conversations, to observe staff relationships, and even to talk to them and use their words as testimonials of the White House’s inner-workings. Virtually everyone with whom the author talked had approved their participation in the book, and no one in a position of authority canceled the project, suggesting that the figures in charge were completely oblivious to what was happening under their noses.

Reactions to the book

As it was to be expected, Fire and Fury provoked a lot of reactions — both negative and positive.

President Donald Trump took to Twitter to show his discontentment with the book and the author, who he personally attacked.

Michael Wolff is a total loser who made up stories in order to sell this really boring and untruthful book. He used Sloppy Steve Bannon, who cried when he got fired and begged for his job. Now Sloppy Steve has been dumped like a dog by almost everyone. Too bad! https://t.co/mEeUhk5ZV9

The accusations allegedly made by Steve Bannon were also the subject of comment by Trump on his personal Twitter profile.

….Actually, throughout my life, my two greatest assets have been mental stability and being, like, really smart. Crooked Hillary Clinton also played these cards very hard and, as everyone knows, went down in flames. I went from VERY successful businessman, to top T.V. Star…..

….to President of the United States (on my first try). I think that would qualify as not smart, but genius….and a very stable genius at that!

The president wasn’t the only one to discuss the book or the subject matter. With more than 11,000 ratings on Goodreads and an average star-rating of 3.75, people showed to be somewhat divided over Fire and Fury.

On one hand, some people uphold the book as one more piece of evidence proving just how unfit for the role of president Trump really is.

Finished Fire and Fury tonight. Pretty good. Really mostly just a retelling of the horror stories we've all been watching, with explanatory background as to which faction drove which crazy action, interspersed with Trump's utter madness.

Others, however, have dismissed this book as “neither an intellectual criticism of Trumpish or a political history of its rise. It is a gossip book (…)” in the words of Andrew Griffin, a writer for the online publication Independent. There seems to be consensus on the fact that Fire and Fury doesn’t make any ground-breaking claims, as most of the events expressed by Wolff in the book are part of the public’s collective knowledge.

Backlash after the release

Lawyer Charles J Harder, who has ties to Trump, sent Henry Holt & Company, the publishing company that holds the rights to Wolff’s Fire and Fury, a cease-and-desist letter threatening legal action if the book wasn’t stopped from hitting the shelves. Elizabeth McNamara of the firm David Wright Tremaine writes in a response shared with the Associated Press that the book is “an accurate report” and that the threat made by Harder has cited no specific errors in the book — which goes against Trump’s statement that the book is fiction.

McNamara also mentions in her response to Harder’s threat that in the event of legal action taken by Trump against the book, both the publisher and the author are “quite confident” that the president’s political and financial documents would be of value for the defense.

What does this mean for the presidency?

The claims made in the book aren’t particularly shocking for those who have been paying attention to the news since the beginning of the 2016 presidential campaign. However, the fact that a writer and journalist managed to get into Trump’s close circle of confidants and capture their reaction to what was going on at the White House at the moment is remarkable. For a president who has proven to be somewhat paranoid at times (one instance of this being the accusation he made at the start of his mandate against Barack Obama for allegedly tapping his office), this could lead to an aggravation of paranoia and distrust in his advisers.

The fact that Fire and Fury sold 500,000 copies within a little under two weeks shows the general public’s interest, a little all around the world, in the inner-workings of Trump’s White House. This can also mean that we can expect many more books about this topic to come out this year, and there is already a list of works being published in the near future.