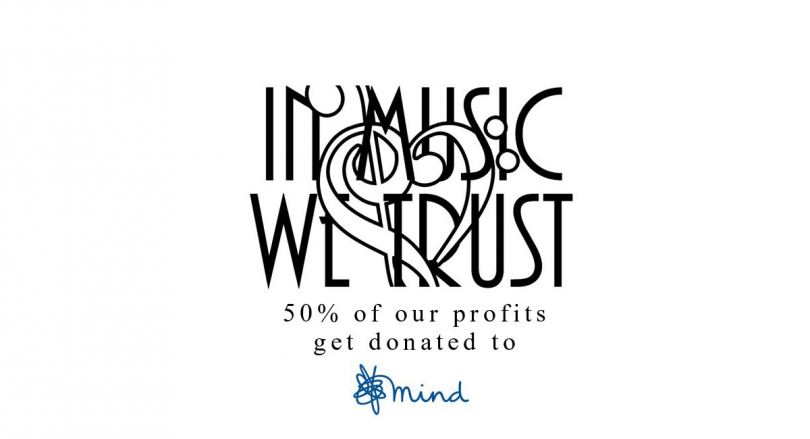 Depression is real and is affecting more people around us each day. According to the Counselling Directory, in the 90’s, 416 million people suffered from depression or anxiety worldwide, while these numbers increased to 615 million in 2013.

Each year in Britain, 1 in 4 adults will experience at least one diagnosable mental health problem, but only 230 of every 300 who need help will actually talk about it.

Mental illnesses are not a weakness and no one should be ashamed to speak their truth. Taking into consideration the fact that 615 million people suffer from depression, it becomes apparent that mentally ill people are not alone. There are services who can provide help and people who will listen at any time.

Aiden Hatfield, 28, from Leeds, has gone through depression, and is now supporting those with the same condition by running a clothing brand called ‘In Music We Trust’. He said: “I’ve started running the clothing brand about 3 years ago. I’ve always wanted to do that and I wanted it to have a meaning behind it. So, I’ve had the idea of donating a portion of the profits to a charity.”

After having that idea, Aiden had to figure out which charity he wanted to donate to. At the time, he had not admitted to himself that he suffered from depression. He added: “Starting the clothing brand was my way of dealing with it, so I decided to donate 50 percent of the profits to a charity that supports those with depression.

“At the start, I donated half of the profits to a charity called ‘Depression Alliance’, but they got taken over by ‘Mind’. I did my research to find out more about the work that Mind would be doing and I decided to follow them from there. I’m a big supporter of the work that ‘Mind’ does, they offer some great ongoing support for those that are dealing with certain mental health issues.”

Also, Aiden admires the work of the ‘Samaritans’ charity. He doesn’t donate to them but promotes the charity to anyone that talks to him about depression or about finding someone to talk to. It is a telephone line that you can get in touch with, offering a lot of suicide prevention support and encouraging people to talk about how they are feeling.

He said: “I definitely promote these charities because there is no better relief than talking about how you are feeling when it comes to depression. Now, that can be anybody. Some people are comfortable talking to strangers rather than somebody they know because they feel that they are a little disconnected from their lives. Some people will only talk to professionals, friends or relatives. It is important that people can find someone they feel comfortable to talk to. If you are not talking about it you are hiding it and if you are hiding it you are pretending that it is not a problem which will only make it worse.

“I chose to name my brand ‘In Music We Trust’ because music is what I put my trust in, and my faith, and my passion. The idea behind the clothing brand is that music helps us deal with whatever it is in our lives that we are going through. Music is what lifts us up. It gives us that escape from whatever we are dealing with. I’m also a musician and music is what keeps me going basically.”

Nobody will EVER make me feel ashamed for having depression

It's an illness, not a weakness!

A lot of people and organisations are now supporting Aiden’s clothing brand, individually or through social media. It was recently featured in the music magazine ‘Kerrang’, as well as, BBC Radio Leeds, where Aiden went on to talk about ‘In Music We Trust’.

He explained: “Within the radio interview, it was the first time that I opened up about my suicide attempt. Since that, a lot of people have really sort of taken to what I’m doing and I’ve realised that they, themselves may need support and I’ve also realised that there is no shame in that.”

According to Aiden, as individuals get older it becomes easier to accept who they are, and how they are feeling. As teenagers, people go through a lot of changes in their life and start growing up a lot more physically and mentally, while at the same time, they try to hold on to being young as well.

He stressed that as you grow up you want to have responsibilities but when you gain those responsibilities you realise that you don’t want them, and this conflict within a person’s mind can generate certain mental illnesses. Teenage years is the period of time when a person goes through changes and is expected to decide who they want to be and what they want to do for the rest of their lives. For him, it seems a little unfair to expect one person to decide all that within such a short couple of years when everything around them is changing as well. There is so much expected of them and anything else gets buried including their feelings.

He continued: “A lot of people do become ashamed of how they are feeling because as people, we are told to just get on with it. If you try to talk to somebody about how you are feeling, a lot of the time that’s just their response. However, there is no shame, whether you are an adult, a teenager or a child, whether you have only just started to experience depression or been feeling that you have had it for a long time.

“If someone comes to you saying that they suffer from depression, you don’t have to say anything to them. Just listen to what they have to say. If you support someone, let them know that you are there for them.”

Aiden has found the purpose of his life, and that is to support people with depression. “This is what I do, it is not a hobby or a project, it is my entire life. My house is taken over by boxes of t-shirts from the clothing brand. Every day I’m replying to tweets and messages from people who are asking for support or how they can support me,” he said.

For the future, he intends to grow his business. He is frequently asked to set up stalls at music festivals and gigs. He has a big presence online but he’d like to create a big presence in person as well, in the live music scene, in his local city and then in the rest of the country. He wants to be a face for those that want to say that they are not ashamed of their mental illness.