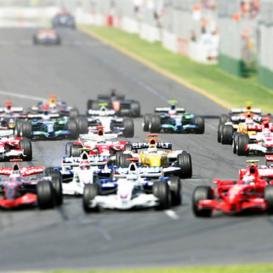 The season is underway. There are new cars, new drivers, new rules and even a new team. The drivers have been putting their 2016 cars through their paces this week as testing began on Monday morning. Four days of lap after lap after lap, as the teams and drivers all started to learn all that they can about their new cars as the first race of the season looms ever closer. Over the four days in Barcelona, the teams covered a combined distance of 19,000 kilometers and will be hoping to do more when the next test gets underway on Tuesday. But what did we actually learn from the thousands of laps that were driven this week?

Lewis Hamilton has declared the first test as ‘pobably the best test we’ve ever had’ as Mercedes clocked up the millage on the the W07. Mercedes managed to do over 1,000 Km more than any team on the grid. Although they are yet to set the timing screens alight with fast laps, they are looking mightly impressive and are yet to run into any reliability problems, which at this stage is crucial.

As well as running lap after lap after lap (675 over the four days), Mercedes continued to bring small updates to the W07 on almost a daily basis.  On the fourth and final day, the defending champions trialed the S-duct on the front wing in an attempt to further extend their areodynamtic advantage. Across the four days, it was Nico Rosberg that set the teams fastest time which was 8th fastest overall.

The silver arrows did not set a time on either the soft, super soft or ultra soft tyre compounds, meaning there is a lot of pace in the evolution of the car that dominated Formula 1 last season yet to be seen. Expect Mercedes to turn the wick up as both Lewis Hamilton and Nico Rosberg look to see what they can extract from their new car and really push the car which is favorite to take both championships to its absolute limit. The rest of the grid should be worried.

Great to be back in the car today. 156 and counting… #barcelonatest @MercedesAMGF1 Photo by LAT Photographic pic.twitter.com/8OK78sW0dG

All eyes were on the new boys on Monday morning. After two years on planning and waiting, F1 newcomers Haas F1 hit the circut for the first time. Armed with a 2016-spec Ferrari engine, Ferrari know how and a Williams gearbox, things are looking bright at Haas F1. Romain Grosjean’s front wing failure on the opening day aside, the team did not encounter too many issues across the four days but did have the final day cut short when Esteban Gutierrez ran into brake problems and then later on the final day electrical issues.

Haas clocked up 281 laps throughout the week and have already managed to complete a race simulation, complete live with live pitstop practice. The third day was when Haas impressed the most. Whist lap times are largly irrelevant in testing (perhaps more so at the opening test), Grosjean put in a quick lap time towards the end of the day to put the new boys 2nd in the times behind Force India’s, Nico Hulkenberg. The time may have been done on the soft tyres and could have been running on on low fuel but 2nd fastest at the end of the day it is still quite the achievement. It is clear that Haas are in a much better place than the teams that joined in 2010, and could be looking at scoring points from lights out in Melbourne.

A huge leap for Manor?

The fact that Manor have even managed to get a new car to the first test of the season is a miracle baring in mind the recent issues with the team. Manor have had constrasting fortunes during the first four days but there is no doubt that the team have made huge strides in terms of performance over the winter.

With a Mercedes engine in the back, Manor have a clear power advantage over the teams that you would expect them to be challenging towards the back of the grid. Pascal Wehrlein who is part of the Mercedes family impressed during his two days in the car, especially on the second day. Wehrlein’s time of 1:25.925s was a full 5 seconds faster than the time the team managed during qualifying for last season’s Spanish Grand Prix at the same circuit. Teams will in some cases find around one second perhaps over last season, but a 5 second improvement is almost unheard of.

McLaren could be in for a long season

Many believed that McLaren Honda would turn a corner this season. There were some signs that this could be the case after the first two days with the 2016 car. After adding an impressive 119 days on day two, added with the 84 laps Jenson Button completed with the MP4-31 on the first day, hopes were high. The car may have not been quick, but it seemed to be fairly reliable. Unfortunately for McLaren it was a week that would get worse and worse from day three as the Woking based team, who have not scored a podium finish since the 2012 Brazilian Grand Prix, ran into more problems with the car.

The third day was not the worst day of testing they have ever encountered but it was certainly difficult. After a encouraging first two days a hydraulic leak which lead to a small fire for Jenson Button ruined the Briton’s day. The final day of the test saw Fernando Alonso jump back into the car for all of just three laps. The Spaniard also was hindered with a leak which resulted in his day being all but completely pointless. McLaren managed more laps than just Manor and  three seconds off the pace. A lot of work will have to be done from now until the next test if McLaren are to avoid being embarrassed once again in Melbourne.

A day of limited running but we’ve learned a lot ahead of the next test. Full team reaction: https://t.co/5BF6qR7rHw pic.twitter.com/WQiPJoShAI

What do you think of the F1 year so far? Have your say in the comments section below.