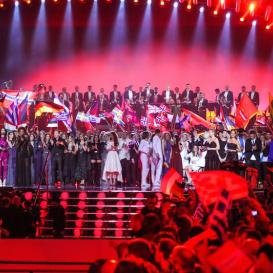 A big event like Eurovision isn’t complete without the mandatory comments plastered all over social media. Last night, Twitter was awash with opinions, with people tweeting about their favourite (and least favourite) acts from around the globe. Let’s take a look at some of the best tweets from the contest.

May the cheese fest begin! #Eurovision2015

Before the songs even started, commentator Graham Norton set the tone for the evening with humour and sarcastic remarks.

The sass in @grahnort is strong already

The contest was opened with a performance by reigning champion, Conchita, and a film explaining this year’s theme – Building Bridges.

This is actually really, really sweet but please get on with it now. #Eurovision2015

Half an hour in, and Slovenia eventually kicked off the competition.

France followed with the first of the ‘songs with a serious message.’

France has gone with a Fallout theme, I note. #Eurovision2015

Israel’s contestant was a 16 year old boy called Nadav Guedj who, as Graham said, instead looked about 35.

After Estonia came the UK’s entry. Twitter had mixed feelings about Electro Velvet.

Next were the somewhat menacing Armenia, as described by our Film Editor Emily Murray.

Lithuania managed to lighten the mood with a High School Musical esque song.

Then came Serbian Lisa Riley. However, the Twittersphere seemed unable to decide who Norway’s Debrah Scarlett resembled most.

Ygritte from Game Of Thrones is representing Norway? #eurovision2015

Wondered where Rebekah Brooks had scuttled off to #nor #eurovision2015

Even at this stage, Sweden were firm favourites.

Will be shocked if #SWE don’t win tonight! Smashed it out the park #Eurovision #Eurovision2015

Tim Schou, 2011’s Denmark representative, didn’t seem to be a fan of Cyprus.

No-one was really sure why Australia were competing this year, but Belgium were next.

After last year’s Polish entry, many were disappointed with their offering this year.

How long are Romania staying for with all those bags? #Eurovision2015

Georgia seemed to be going for ‘roadkill chic.’

These dancers look like they’re trying to emerge from some sort of primordial #eurovision swamp.

Actor Mark Gatiss voiced the thoughts many people were having about Russia.

If Russia win it could be good. All the gays descending on Moscow…

#Eurovision2015 She got the short straw… Following Russia… Ouch. She is a bit meh.

Then we were finally onto the results. Some people took it seriously…

so Sweden have won it – aw look how happy he is #SWE #Eurovision2015 pic.twitter.com/U7HftQXJgF

…Others were a bit tongue in cheek.

While others took the sarcasm to the next level.

Breaking News: Kim Jong Un is happy to announce that North Korea have won #Eurovision2015 by a record breaking 1000 points.

And to end, my personal favourite: