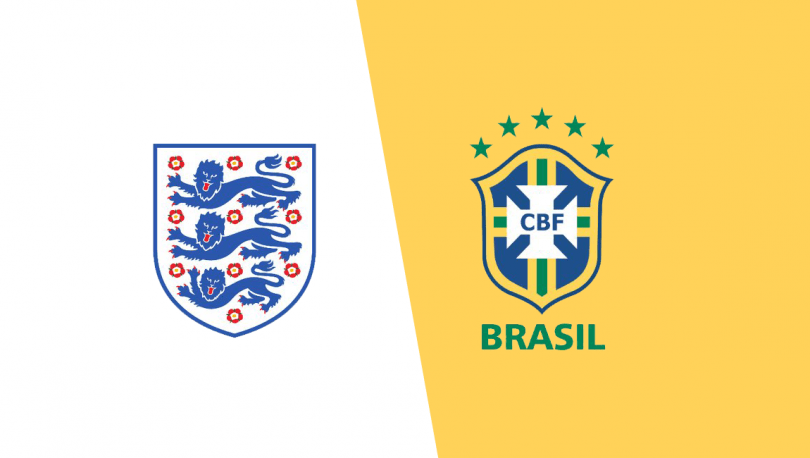 England play Brazil at Wembley Stadium on Tuesday, and Gareth Southgate will feel confident after the promising performance his depleted squad showed against Germany. Phil Jones came off injured in that game, and the player who Southgate dubbed ‘England’s best defender’ joins a list of absentees including: Harry Kane, Dele Alli, Raheem Sterling and Jordan Henderson.

Ahead of the match, I used the newly released Football Manager 2018, to simulate the result. The squads used are correct as of the time of this article. Due to squad size limitations, I had to cut Diego and Diego Souza from Brazil’s 23, deeming those two the least likely to be involved.

Despite a few good efforts from the Germany game, notably Ruben Loftus-Cheek, I think Southgate will use this chance to look at the other players he has available. Only Stones, Dier and Vardy will keep their places, and Rashford and Lingard will operate either side of Vardy.

Gareth Southgate has confirmed that @ericdier will retain the #ThreeLions captaincy for tomorrow's game against Brazil. pic.twitter.com/pB2wbS4IrA

Philippe Coutinho looks set to start for Brazil, in a team which I think will closely resemble that which started against Japan. Dani Alves could replace Danilo, and either Miranda or Marquinhos might come in for Jemerson, but I’m expecting a strong line-up from the team ranked second in the world.

The game started quickly, with the first goal coming from Brazil in the 2nd minute. A Neymar cross was tucked in from close range by Willian. England replied five minutes later, when John Stones was set up by Marcus Rashford. The half ended 1-1.

Brazil looked slightly more comfortable than England, but there was plenty of time left. I decided not to make any substitutes unless there were any injuries.

Brazil started well, and looked the most likely to score but took until the 76th minute to do so. Gabriel Jesus played in Willian for his second goal of the game, as the two Premier League starts combined. The game ended 1-2.

The game was relatively close between a very strong Brazil and an England side with a few players missing. If this is the case on Tuesday, Southgate will be impressed yet again by the efforts of his team. Willian (9.00) and Jesse Lingard (7.50) received the highest ratings for their respective countries.

As for the real game on Tuesday, I think England will come away with at least a draw. Nonetheless, the experience will be great for this young team.