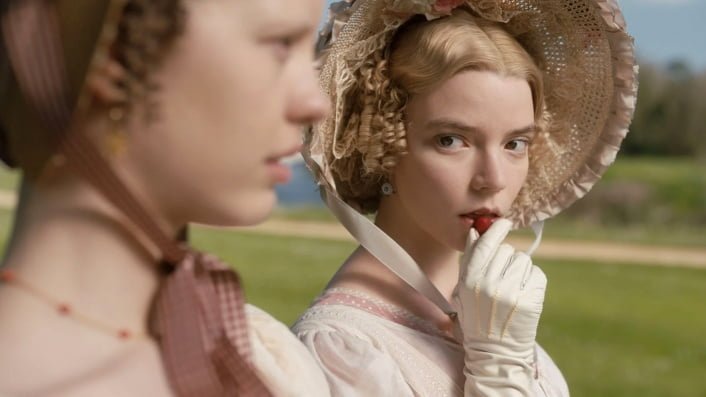 Emma 2020, starring Anya Taylor Joy, is the quintessential screwball comedy film. She is charming, witty, and can be a right bitch. In many ways she is the female Mr Darcy. Her intellect and vivacity for life is confined into the limited choices available for women in Regency England. So what do you do when the patriarchy has got you down? You mess about in everyone’s love life. Against all odds, you just can’t help rooting for her.

This new period costume adaption brings the life and comedy to Jane Austen like nothing before. Note that I did specify period piece, Amy Heckerling’s Clueless will always reign supreme when it comes to bringing Jane Austen’s comedic genius to life. Emma also gives us a view of Mr. Knightley’s bare ass. Don’t worry kids it’s natural nudity so it still has a U rating.

The portrayal of the gentry being reliant on servants for everything is hilarious! It also puts into focus the privileged position that the characters inhabit.

The dialogue written by the Man Booker prize winner Eleanor Catton is crisp and carries the plot and character development swiftly along. The film is dialogue-heavy, and several jokes come from the character Mrs. Bates (Miranda Heart) who is quite annoying which is her intended purpose. She just does not shut up. However, when she does finally get her comeuppance by Emma you feel devastated.

Emma is played by the relative newcomer Anya Taylor-Joy whose best known currently for her work in The Witch. She successfully played the part of Emma with all the flair, style, and arrogance the character possesses, breaking out of her typecast.2020 looks to be a promising year for Anya Taylor-Joy what with Emma and her upcoming horror project Last Night in Soho.

The chemistry between Mr. Knightly and Emma was present but subtle, so if you’re expecting grand romantic confessions that use the word ardently then you will be disappointed. Johnny Flynn gives an admirable performance as Mr. Knightly and I found myself surprisingly warming up to him, and thinking what a sweetie pie he is. I’ve always found Mr. Knightly slightly creepy and Mark Strong’s portrayal of him didn’t help. I now have the line ‘I remember holding you in my arms as a babe’ permanently etched into my mind.

The film is directed by first-time female director Autumn de Wilde. She has a background in filming music videos and photography for musicians. Her direction for this movie is perfect. Autumn de Wilde and Emma are a match made in heaven and it certainly does not feel like a debut film. The film is bursting with colour. Blues, greens, yellows, and pinks splash across the screen. The music by Isobel Waller-Bridge and costume by Alexandra Byrne is the icing on the cake to this masterful adaptation.

Emma is a classic tale that still feels original. Defiantly a film you should take your date or friend to. The question isn’t ‘do we need another Emma’ the question is why not? Patrick Burow mentions that the film represents 50s and 60s Romcoms. You can find his review here
https://www.youtube.com/watch?v=QbeaPB_wzhE