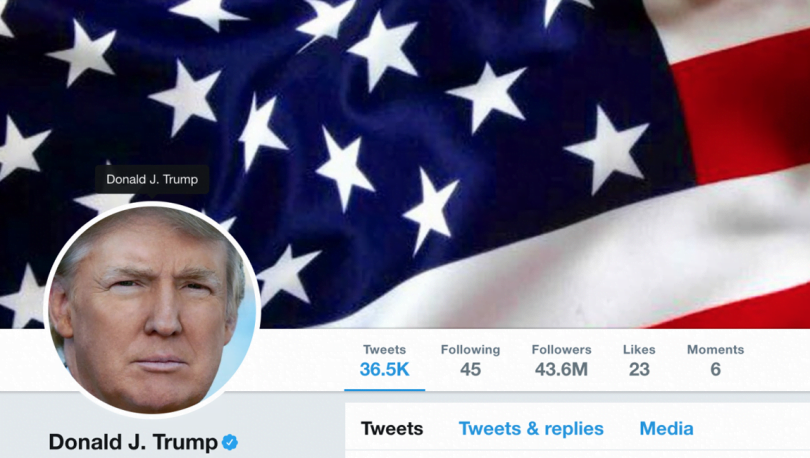 This isn’t the first time Trump has shared something on Twitter to support, from his point of view, the agenda on immigration — and particularly on the evil of Islam. However, the tweets had never shown such brutal images that were flagged by the social platform as containing sensitive material.

What’s in the videos

The first video is of an alleged “Muslim migrant” attacking a young Dutch man on crutches, it has the Dutch photo-hosting and video-hosting website Dupert watermark on the left-hand corner of the video. This video had been taken down from this website earlier this year (May 2017) at the request of the victim’s family and the police. A spokesperson from the Dutch Public Prosecution Service told the BBC that the person arrested for the attack “was born and raised in the Netherlands” and not a migrant, as claimed in Fransen’s original tweet.

The second one shows a man smashing a statue of the Virgin Mary to pieces. It had previously been uploaded to Youtube in 2013, and the information that was included along with the video tells us that it was taken in Syria. It is possible to be heard in the clip the man saying in formal Fusha Arabic “No-one but Allah will be worshipped in the land of the Levant,” (a possible reference to Syria). This branch of Arabic makes it hard to say where the man is from, and therefore hard to conclude if the footage was really taken in Syrian territory.

The last video Trump tweeted had the caption “VIDEO: Islamist mob pushes teenage boy off roof and beats him to death!” and shows a group of men on a rooftop, one of them carrying a black flag with white inscriptions, beating another man, before finally pushing him off a roof. According to the BBC these graphic images can be traced back from the riots that took place in Egypt in 2013 amidst protests for the resignation of President Mohammed Morsi.

Other anti-Muslim behaviours from the President

It is no secret that Trump views Islam as being anti-American (“Islam hates us” in his own words spoken last year on a campaign trail) and a threat to the Western world. He has advocated for a registry of all Muslims living in the United States and for a “total and complete shutdown” of Muslims going to the United States during his presidential campaign in 2015 and 2016. He has also engaged in a transatlantic feud with Sadiq Khan, the mayor of London, after terrorist attacks had taken place in this city and branding him as weak on terrorism.

The travel ban that Trump has tried to implement three times since taking office in January 2017 would make it impossible for refugees to enter the United States for a probatory period of time, as well as all common citizens from eight, seven, or six countries (most of them Muslim-majority countries) depending on the version of the bill.

Reaction to the tweets by British officials

A spokesperson for Theresa May spoke out against Donald Trump’s actions for sharing these videos saying “It is wrong for the president to have done this.” The actions of the original poster, Jayda Fransen (the Britain First deputy leader) were also the target of criticism by the leader of the Conservative Party's spokesperson — “Britain First seeks to divide communities by their use of hateful narratives that peddle lies and stoke tensions. They cause anxiety to law-abiding people.”

A member of Parliament for the Labour Party also expressed his dissatisfaction with the president of the United States’ actions.

Trump sharing Britain First. Let that sink in. The President of the United States is promoting a fascist, racist, extremist hate group whose leaders have been arrested and convicted. He is no ally or friend of ours. @realDonaldTrump you are not welcome in my country and my city.

Other members of Parliament also spoke out against this issue on their Twitter accounts.

The White House’s and Trump’s reaction to backlash

It didn’t take long for the president to address the backlash coming from across the sea, mentioning Theresa May in a tweet later that day.

.@Theresa_May, don’t focus on me, focus on the destructive Radical Islamic Terrorism that is taking place within the United Kingdom. We are doing just fine!

The tweets and videos in question were justified by the White House as being a way to start a conversation, “The threat has to be talked about and that is what the President is doing in bringing that up.”