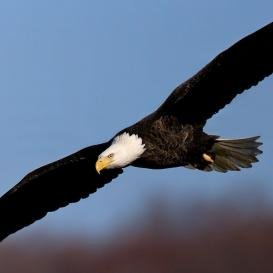 The use of drones has been a rather controversial matter in recent years to say the least. Their use has led to a number of concerns, including the issue of drones falling into the wrong hands and being used to commit crimes. In response to this, the Metropolitan Police are considering the bizarre and outside-the-box method of using eagles to intercept suspicious drones. This means the skies of London may soon be the backdrop for an ongoing battle between machine and bird…

So what crimes are drones being used for exactly?

In November, the Ministry of Justice reported that a drone was being used to smuggle goods (including drugs and mobile phones) into the grounds of HM Prison Manchester before being discovered by guards. In fact, the Ministry of Justice reported nine attempts to use drones to sneak into prisons in the first five months of 2015 alone. Furthermore, police have warned in the past that burglars are using drones to spy on homes.

The use of drones by the general public also present other dangers. The UK Air Proximity Board reported in January that drones were recently involved in four serious near misses at UK airports- including one instance in which a drone had come extremely close to colliding with a Boeing 737 taking off from Stansted. Then there’s the danger of terrorism and how terrorist groups could soon use drones as “simple, affordable and effective airborne improvised explosive devices” (as suggested by London-based think tank the Remote Control Project).

The eagles are coming

The idea to use eagles to take down drones comes from a Dutch police initiative to train and use eagles to intercept drones. The force’s commissioner, Sir Bernard Hogan-Howe, was apparently impressed after the Netherlands released a video last month showing an eagle catching a drone and began an enquiry to establish whether a similar idea could work in London.

It’s fair to say that eagles would be suited for the job and actually offer a number of advantages. Guard From Above, the firm that trains the birds of prey, stated the eagles are a “a low-tech solution for a high-tech problem”. Particularly, eagles provide a less dangerous but more effective alternative to using anti-drones. Moreover, eagles possess amazing visual acuity and so would be able to take down the drone without being hit by its rotors.

Is this a gimmick?

There have been a few criticisms towards the proposed project, however. Jemima Parry-Jones, director of the International Centre of Birds of Prey in Gloucestershire, described the plan as a “gimmick” and expressed scepticism over whether eagles would be able to avoid the rotors of the drone. She stated: “Eagles are big, powerful birds; they should not be flown in built-up areas. And secondly in terms of the safety of the bird, you’re asking it to grab hold of a drone, which often have four rotating blades keeping it in the air.”

Despite perhaps the ethical concerns of using eagles to intercept drones, the RSPCA said they do “not have an issue with police forces training eagles in an attempt to tackle drones, although we would have concerns over the welfare of the birds.”

So keep an eye out, because if the project goes ahead, soon drones might be snatched from the sky.

What do you think of the project? Let us know in the comments below!