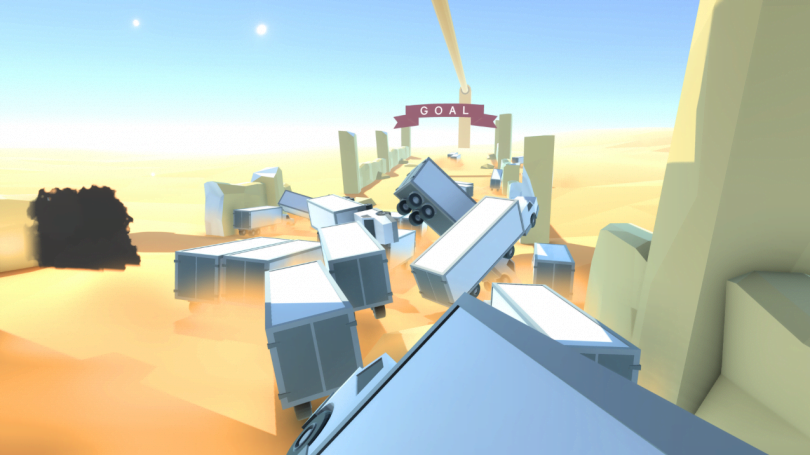 My general experience with truck-themed games is maintaining the speed limit cruising down an idyllic motorway near Rotterdam listening to incomprehensible Dutch internet radio for a fully immersive experience. This is not the experience I got with Clustertruck, however.

Clustertruck is an aptly named game which ends up putting its physics engine to the test with a clusterfuck of trucks flying and exploding all over the place. You, as the faceless first person protagonist, are forced to manoeuvre across a horde of multiple moving trucks towards a finish line as they veer and collide unexpectedly.

In terms of content, one might find Clustertruck lacking as there isn’t more to it other than the basic concept, but that is okay. If you play this game you’re not looking for depth. Instead, we are presented with an insane skill and reaction based game where we are continually challenged further as the skill cap. The game starts simple enough with very basic levels, but it quickly increases difficulty as we are presented with more implausible and impossible scenarios. To help tackle these new obstacles including hammers, lasers, cliffs, swinging weapons, and all over kinds of moving madness. Clustertruck's levels remind me of the way a three-year-old would play with their toys, slamming them together, throwing them off tables, and eventually breaking them.

Perhaps Clustertruck's most interesting feature is it's Twitch integration, which allows viewers to vote on specific events that can occur in the game, such as all trucks becoming bombs as soon as you land on them. This will likely make the game popular amongst streamers and give their audiences new ways to torture their idols.

The difficulty of the game may force some players to rage quit, but for the stubborn masochist it’s addictive and you have found the game for you. Regardless, for the price of £10.99 it’s cheaper than a haircut and will have you pulling your hair out all the same.

Will you be playing Clustertruck? Let us know in the comments below!