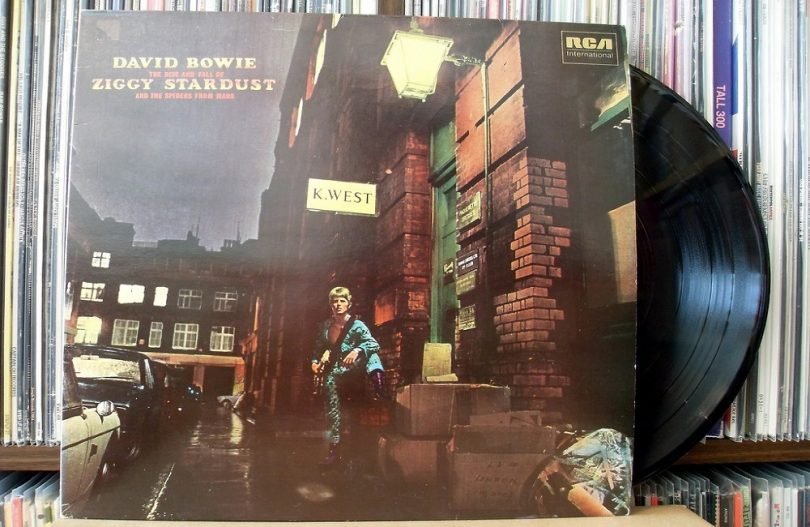 The bizarre figure of Ziggy Stardust, with his orange hair and space-age jumpsuit struts around the stage at the Hammersmith Odeon on the 3rd of July 1973. Little did the adoring, screaming audience know that David Bowie was about to retire his intergalactic alter ego after unprecedented success. The year before saw the release of The Rise and Fall of Ziggy Stardust and the Spiders from Mars (for brevity I’ll refer to it as ‘Ziggy’.) A concept album that chronicled the time on Earth of this alien man who fell from the galaxy.

The first song, ‘Five Years’, starts the story as we discover that Ziggy Stardust only has half a decade to make his mark before leaving the planet. The Spiders from Mars (led by the exceptionally gifted guitarist Mick Ronson) are the backing band of the androgynous oddball parading around in all-in-one body suits and sparkly boots. After limited chart success in the early years of his music career, David Bowie had found a formula that worked – and made him a millionaire megastar. After coming through the hippy era, Bowie carved out his niche as an effeminate showman with this crazy alter ego. Ziggy was the first real gem in Bowie’s repertoire.

By the time you reach the third track, ‘Moonage Daydream,’ you start to understand that Ziggy Stardust and his Spiders fell to Earth searching for fame and fortune. The music business is a wild animal that fits Ziggy’s persona perfectly as his ego is created by the corporate machine. ‘Moonage Daydream’ portrays the protagonist as a messiah, an alien hero sent to this planet to save it from itself through his unique music.

Further enhancing Bowie’s reputation as the saviour of nineteen-seventies rock and roll, Ziggy continues in its path through the psyche of glam rock as ‘Lady Stardust’ chimes in halfway through the epic. The song has been interpreted as being about Bowie’s great friend and glam rock rival, Marc Bolan from T-Rex. The two iconic frontmen forged a path of long hair and glitter that threw away the straight-laced values of early 1970s Britain and fully embraced the ‘be yourself’ ethos of the Age of Aquarius.

‘Ziggy Stardust’ is the first real self-referential song from Bowie’s canon. As his ego begins to devour Stardust, he falls out of love with the music business and, eventually, with planet Earth. ‘Making love with his ego, Ziggy went up into his mind’ suggests that as time has gone on, the business has become a hotbed of greed and egotistical singers that think they’re better than the world. The finishing lines "Ziggy played…guitar" show a real yearning for the alien character’s early innocence, as if to say that as the band has got bigger and more successful, they’ve forgotten their space-age roots.

The final song on Ziggy, the depressingly titled ‘Rock and Roll Suicide’ depicts Ziggy’s life as a washed-up rockstar, desperate to cling on to his fame and fortune but with his career and reputation in tatters. The business and the planet have chewed him up and spat him out; the final piece of scathing satire from Bowie’s carrot-topped alter ego.

A real introduction into the shimmering world of glam rock and a swipe at the corporate culture of the early seventies, Ziggy is an album that is both cathartic and delightful and is a must listen, hence why it is the second album in this series. It made David Bowie the global star he remained until his death earlier this year.

Got a classic album you think we should feature in the series? Get in touch with us via Twitter or the comments section below!