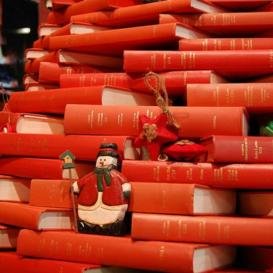 I think Christmas is that time of year which brings out the young, childlike spirit in all of us (unless you’re a Grinch). Even so, it is always important to reconnect with that younger side of ourselves, no matter how old we are. I would suggest that you take time out this Christmas and as the New Year approaches, whenever you’re not  shopping or baking mince pies, to sit down on the sofa and curl up with a good book that will reawaken your imagination. Even if you don’t like reading (and if you don’t, you simply haven’t read the right one) I think that buying a book makes for the perfect Christmas present, so here are my top five books for this Christmas holiday.

I’m not sure anything tops the required reading list than Peter Pan. Barrie truly cemented his name with his ‘fairy play’ about a young boy that never grows up, an ordinary girl called Wendy, and a certain fairy called Tinkerbell. Not mentioning all the adventures with mermaids, Tiger Lily and crocodiles, Peter’s gang of Lost Boys and the Darlings and the notorious pirate Captain Hook. This entire story was inspired by a young family in real life, called the Llewelyn Davies. Before Barrie died, he donated his rights to Peter Pan to the Great Ormond Street Hospital. The children’s hospital still profit from this act of kindness today. If nothing else, Barrie’s legacy reminds us to be charitable at Christmastime to families who truly need the extra support.

I vividly remembering this story for the first time, curled up on the sofa the day after Christmas. This is an enchanting tale of a spoilt, orphaned girl from India who eventually finds solace in the hidden garden of her absent uncle’s manor. I still manage to find my way back to it every Christmas simply because of the special sort of magic Burnett weaves into her tale. She allows us to sympathise with Mary and Colin, two seemingly self-absorbed cousins, because they have been raised without their parent’s love.

the secret garden is such a classic, i love it

Perhaps the greatest lesson to be learnt from this novel is the importance of friendship over material wealth. Mary and Collin’s transformation is all the more profound at the end as they realise that the only limits are the ones they have set themselves. There is also a brilliant 1993 film adaptation starring Dame Maggie Smith (need I go on) as Mrs Medlock – the overbearing housekeeper left in in charge of Mary and Collin in their uncle and father’s absence. The younger actors didn’t really achieve further fame…although I think that the young Collin looks a lot like Matthew from Downton Abbey. Just me?

Not so typical, but this is one of those classics about a young girl who goes to live with her grandfather in the hills of Switzerland, and makes friends with a rich but unhappy girl named Clara. She also has a goat.

Reading this book made me want to live in Switzerland just like Heidi as the vision the novel conveys is so perfect and so charming. It’s all about another life that is perfect to escape to, especially on a cold winter’s day.

Another novel by Burnett, but potentially her greatest, as it follows the tale of the orphaned Sarah, who seemingly loses her beloved Papa during World War One. Sarah had been left at the all-girls academy her mother previously attended while her father was absent but upon his death, she is relinquished from her status as star pupil to a lowly servant, by the evil headmistress.

Sarah comforts herself with her stories of India, her friends (which include a non-talking but clever monkey), and the belief that like every little girl, she is still her father’s little princess. The ending is quite emotional but it resolves happily. Like The Secret Garden, this story was also made into a film, which is just as inspiring as the novel, making for a suitable, not-so-cliché Christmas story. The best quote from the film: ‘PAPA!’ I won’t say anymore.

Little Women by Louisa May Alcott

This novel depicts the lives and loves of the four March sisters, who grow up while the beloved patriarch of their family is at war. It is also one of the novels that has stayed with me through life. With three older sisters of my own (who also love the classic tale), I often fell into the game of labelling each sister as a different character. Meg, Jo, Beth and Amy March became my own sisters, as everything they did seemed to resonate into my own, personal childhood games with my sisters.

I find it hard to pass each Christmas without watching the film adaptation with Winona Ryder, Susan Sarandon, Claire Danes and a very young Christian Bale at least once (mainly because my sister is constantly watching it on Netflix.)

I found that while writing this list I kept coming up with more and more additions to my list and it was hard to just list five. While Charles Dickens, (A Christmas Carol, Great Expectations) may be the conventional writer you turn to at Christmas, I hope that you give these other books a try and rediscover a younger, more idealistic part of yourself that fell in love with the true spirit of Christmas.