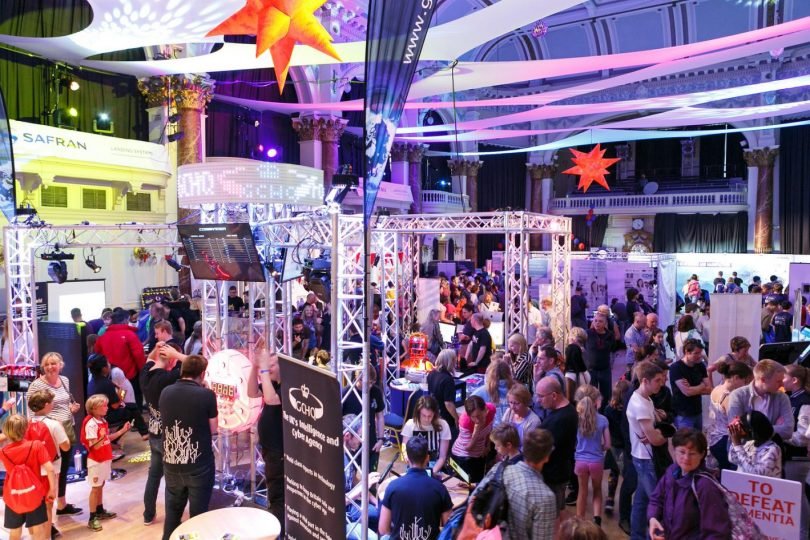 Cheltenham Science Festival returned to the town for another jam packed programme of hands on events and talks from some of the top names in science. We headed along for just a taster of what the festival had on offer.

Kicking things off for Kettle at the event was wildlife cameraman Doug Allan, who took to the stage at the Science Festival to a packed out audience to bring to life his years of work & knowledge in the field. When discussing his various experiences with nature and wildlife it was difficult to not feel envious. Mixing discussion & stories with stills and video footage, Doug provided a real insight into just what it takes to get that one shot that everyone remembers.

Right place, right time was the overwhelming theme that ran throughout. After showing footage that he had managed to capture of a pod of wales hunting a seal by making waves to tip the animal into the sea, he explained the amount of planning that had gone into it but also the luck that came with it. After a previous trip to gain such footage had been unsuccessful, he then sat down with biologist and scientists to plan the right time to be there and the outcome couldn’t have been better. The crew were lucky enough to witness over 120 waves across a number of attacks & created a sequence for BBC’s Frozen Planet that has become one of its most memorable.

Climate change is a subject that is close to Allan and also incredibly timely. As someone who has been located out in the Arctic and Antarctic across a number of decades the changes that have occurred is something he has, & still is, witnessed first-hand. It gave the audience something to consider &, being from someone other than a politician, may have sunk in a little better.

Wrapping up the event with a quick mention that he was heading off to film some polar bears the following week; the event gave audiences a real insight into what it is to be a wildlife cameraman out there in the extremes of nature. Watching Planet Earth won’t be the same again!

The Overly Ambitious Demo Challenge was event two of Cheltenham Science Festival for Kettle; overly ambitious it certainly was. Pushing science to its limits and, sometimes, succeeding, scientists from varying sectors displayed everything from popping a balloon using only orange peel to demonstrating the ability to make a laser dance using only a typewriter. Whilst the competition element became a little lost and the loser somehow became the winner, the real highlight was the demonstration of gravitational waves by Steve Mould. Through clever use of a laser and a drill, yes that’s right, he managed to perfectly show just how they work. The relevance to recent events of the Rosetta Mission really brought big scale science to the masses in a simplistic way.

Ending the festival with Science; Big Bang For Your Buck? with Andrew Steele was a perfectly timed choice, given recent political events. Exploring just how the government spend our money within the science industry provided a real insight into a world that is often too big to get our heads around. Breaking money down into spending per person per year, it gave audiences a deeper & clearer understanding and really gave some food for though. Who knew that under 70p per person per year was spent on researching strokes? It seems surprising when around a third of the population can die of one. The, slightly morbid, yet comical look at the subject really summed up the diversity of the programme on offer at the festival and it was a little disappointing to see such a small audience for the event. People certainly missed out.

Cheltenham Science Festival was once again a roaring success with something for everyone. We look forward to what next year has in store!