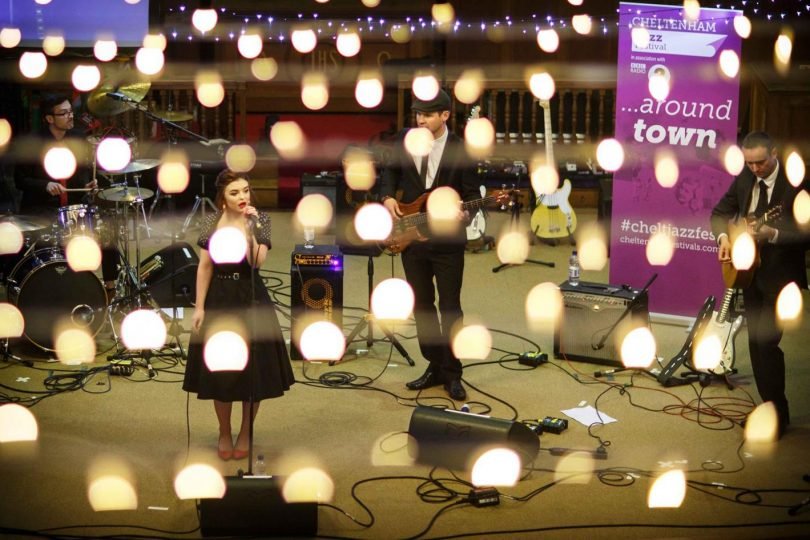 Cheltenham Jazz Festival has once again been a roaring success. Bringing some of the biggest names in jazz, swing, skiffle and funk to Gloucestershire, the 6 day festival saw laid back afternoon around town sessions, high energy party vibes – and even a fight!

Even on a fairly dreary typical UK weekend, the Jazz Festival manage to bring the festival feel to the heart of Cheltenham. Taking place mostly in Montpellier Gardens, with the sounds of the festivals Free Stage echoing out into the bar, the atmosphere was very nearly close to that of a festival at the height of summer. People of all ages could be seen enjoying themselves, some taking more advantage of the bar than others, and it was clear that the festival had a real appeal to a broad audience – jazz fans or not.

Jack Savoretti was our main pick at the festival this year and it was certainly a great choice to have made. With his set being broadcast live on BBC Radio 2, audiences were treated to an introduction by Jo Whiley, who kept it short and sweet leaving an already excited audience not waiting long at all.

His hour and a half set was filled with tracks from both Written In The Scars and his latest release Sleep No More – as well as a few fan favourites from his earlier 3 releases. Launching in with Written In The Scars followed by new single We Are Bound, Jack instantly had the adoring audience in the palm of his hand, captivated by every word. Set highlights without a doubt were the beautiful I’m Yours and the wanderlust driven Tie Me Down.

Whilst not being a jazz artist, and possibly a little out of place on paper on the line up, there are some real jazz elements to Jack’s style both musically and in his performance. That passion and the drive that there is behind the music is something which very much comes across in the live environment. Jazz music often has a soul element to it and this is something which throughout the Thursday night Big Top set Jack and his band communicated across. It was easy to see just how much they love what they do.

There were even some members of the audience throwing some ‘jazz moves’ to Knock Knock. When We Were Lovers brought the headline set to a close and really showcased just how much of a talent he is.

Saturday night saw local favourites Thrill Collins headline the festivals Free Stage and it certainly turned into an unexpected evening of events. For those unaware of the band, Thrill Collins take those pop/hip hop/garage songs that you love and make them better. Who doesn’t want to listen to a 7 minute garage medley in a skiffle style?

From Britney to B*Witched to Dirty Dancing, it was throwbacks galore! Sadly there were a few audience members on the night who put a minor dampener on what is always an hour of absolute joy, with a small fight (or absolute mass brawl if you believe local press) breaking out.

Ever the absolute professionals Thrill Collins halted their set until calm had been restored and then concluded their set with a Backstreet Boys classic – we’re mainly annoyed that audiences were deprived of the rest of the longest & best skiffle hip hop medley there is!

It’s safe to say that once again Cheltenham Jazz Festival provided 6 days of great music in a variety of locations and introduced many people to a genre of music they may not have given a second thought before. Only another year to go!

In the meantime, next up is Cheltenham Science Festival – will you be heading along?