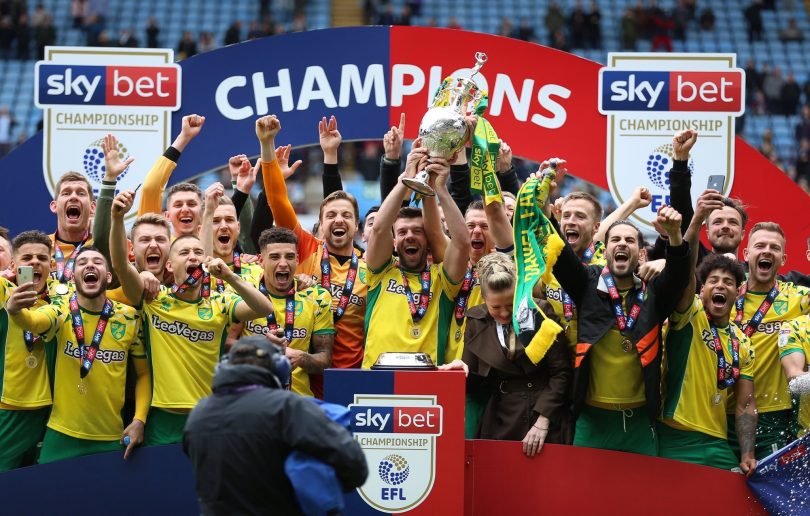 On Sunday the Championship’s regular season reached its climax as we found out who finished top and which team grabbed the last play-off spot. Norwich knew they only needed a point away at Aston Villa to be crowned champions but a late Mario Vrancic goal ensured the Canaries earned their 27th league win of the season to finish top of the pile. With the relegated teams already confirmed heading into matchday 46, the only other battle was for the last play-off spot. It was a three-way duel between Derby, Middlesbrough and Bristol City. Derby’s fate was in their own hands as a home win against West Brom would confirm they finish 6th. However, if the Rams were to slip up, Middlesbrough and Bristol City were ready to pounce. City could only draw away at Hull meaning they finished 8th. Middlesbrough on the other hand managed to win 2-1 in Rotherham which, for a period of time, meant they occupied a play-off spot. Frank Lampard’s Derby were drawing with West Brom but scored twice in three second half minutes to cement their place in the play-offs.

Two teams that perhaps were not expected to be in these play-offs, but for very different reasons. Derby had to win on the final day to secure their place, whilst Leeds were in the automatic promotion spots nearly all season but three wins in their last nine games left the club having to gain promotion the hard way. The first game in that run was a significant one, a home defeat to fellow title contenders Sheffield United. That victory lifted Chris Wilder’s team above their Yorkshire rivals, and they never looked back.

For Leeds it’s seems like it is now or never. It has been a managerial merry-go-round at Elland Road in recent years, with 13 managers manning the dugout in just seven years. After somehow missing out on the play-offs in the 2016/17 season under Garry Monk, it looked as though the Whites would never find success again. Then came in Marcelo Bielsa, a highly experienced coach who had managed international teams such as Argentina and Chile as well as many established European sides like Athletic Bilbao, Marseille, Lazio and Lille. Bielsa was a big coup for a Championship side and it appeared that he was going to bring instant success to Elland Road but, despite being top of the league as late as March, Leeds now need the 63 year-old to use all of his experience to guide his side back to the top flight via the play-offs. Despite United’s poor run of form they should not be underestimated, there is still a lot of quality in that squad. Playmaker Pablo Hernández is having his most prolific season to date with 12 goals and 12 assists, forward Kemar Roofe has bagged 14 league goals whilst in between the sticks Leeds have former Real Madrid shot-stopper Kiko Casilla. It is a squad that deserves to play in the Premier League, but only time will tell if Leeds’ 14 year break from the top flight will finally come to an end.

If Marcelo Bielsa is near the top of the experience ladder, then the manager he is coming up against hasn’t even reached the first step. Frank Lampard is in his first season as the boss and what a campaign it has been, regardless of what happens in these play-offs. Derby took a huge risk hiring a man without any coaching experience, yes he had an established footballing career but that status doesn’t always mean success will come when they are in the hot seat, just ask Thierry Henry, Paul Scholes or Gary Neville. The risk however seems to be paying off for County, with the former Chelsea midfielder leading his side to their third play-off appearance in five seasons. They also earned a famous win in the EFL Cup away at Manchester United back in September. Lampard has got his side playing exciting, attacking football with a team that has found the balance between youth and experience. Captain Richard Keogh has started every game this season for Derby, showing he can still mix it with the best at 32. Winger Harry Wilson and midfielder Mason Mount are on loan from Liverpool and Chelsea respectively and have both played key parts in Derby’s success. Wilson has 15 goals and three assists in the league whilst Mount has eight goals and four assists. Many fans and pundits believe Chelsea loanee Mount has the ability to become the next Lampard and the 20 year-old has said the iconic Chelsea midfielder was his idol growing up.

When these two met at Pride Park in the second week of the season, Lampard suffered his first home loss as a manger as Leeds comfortably won 4-1. United completed the double over their play-off rivals in mid-January, winning 2-0. I believe these two huge games coming up will be a lot tighter, with both managers having so much to prove. Despite Leeds finishing nine points above County, form says that Lampard will be leading his side through to the final at Wembley and I have to agree, I think Derby will take this one.

The other semi-final features two side with years of Premier League experience. West Brom are looking for an instant response to their relegation from England’s top tier last season, their demotion ended an eight year stay in the league. Aston Villa dropped down to the Championship in the 2015/16 season, the first time they had been out of the top flight for 28 years.

Villa got as close as you can come without promotion last season; they lost the play-off final to Fulham 1-0. Steve Bruce was in charge at Villa Park at the time, but he only lasted three months into the following campaign and was sacked after Villa had won just one of their last nine league games leaving them 13th. The club identified Brentford boss Dean Smith as the perfect replacement, and they managed to pry the 48 year-old away from the London club. Smith’s knowledge of the Championship has proved vital as Villa have slowly but surely climbed up the table. Goals were the key issue Smith had to address, not scoring them (the Villans were third top scorers) but goals going in at the wrong end, they were conceding way too many for a side gunning for promotion. The former Walsall manager did manage to sure up his defence slightly, with the help of former England captain John Terry as his assistant manager, but it seems as though Smith realised his team were always going to concede, so it was his job to make sure they scored more. Chelsea loanee Tammy Abraham helped with that specific problem, scoring nearly a third of Villa’s league goals to finish second in the golden boot race. The 21 year-old did get injured just under a month ago against Bolton but the medical team at Villa have confirmed he will be fit for the two games against West Brom. That will be a huge boost.

Speaking of goals, there might not be a deadlier strike force in England – or Europe – right now than West Brom’s Jay Rodriguez and Dwight Gayle. The pair have 58, yes 58(!) goal contributions between them in the Championship alone. Gayle, who is on loan from Newcastle, has 23 league goals whilst Rodriguez has scored 22 times, two of those coming against their play-off opponents Aston Villa. One small downfall for West Brom is that striker Hal Robson-Kanu will be suspended for the two-legged tie against Villa after receiving a needless red card in injury time against Derby on the final day. All of this has come during a season where the Baggies have changed managers too. When Darren Moore was sacked in early March I was shocked, I thought it was the wrong decision. Okay, so the team had hit a bad patch of form that had seen them drop out of the automatic promotion places but every team has a sticky spell don’t they? Moore, despite coming down with West Brom, had brought exciting football back to the Hawthorns, and had made shrewd signings that got the fans believing in their side again. I thought that the club had fallen on their feet with Moore but clearly the board did not feel the same way. Up steps James Shan. The 40 year-old was the first team coach at West Brom and was given the temporary reigns. He led his side to six wins in their remaining nine league games to cement their play-off place. Shan has actually changed the Baggies system in their last five games, switching from a 4-3-3 formation to a 3-5-2 and the team seems to be responding well to it. Could this be the vital detail that sees West Brom bounce straight back into the Premier League at the first time of asking?

Aston Villa are yet to beat West Brom this season, drawing 2-2 at the Hawthorns before putting in a sorry performance in a 2-0 defeat on home soil. I think these two games will be very open, I predict that we will see a lot of goals scored especially with the return of Villa’s top scorer Tammy Abraham. Can he outshine the deadly-duo of Gayle and Rodriguez? I’m going to say yes, Abraham to lead Villa into another play-off final.