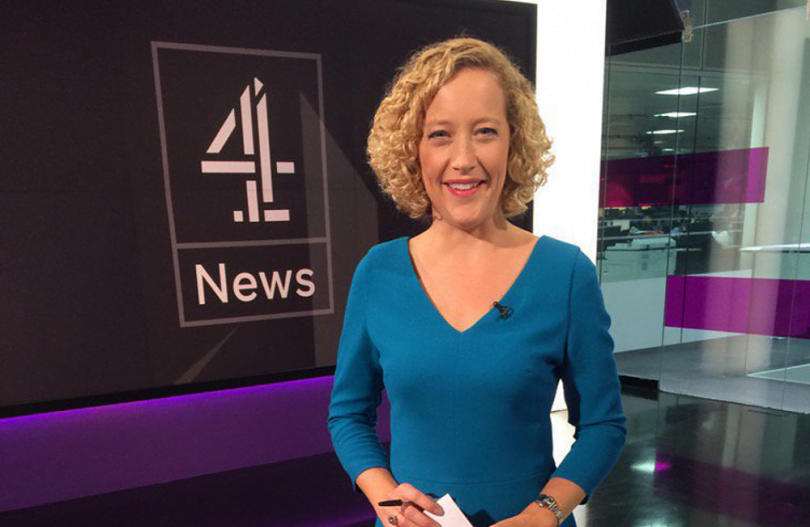 Five and a half years ago, ITN, the news organisation that produces Channel 4 News, did something that was a first for that programme – it named its first female co-presenter, sharing presenting duties with Jon Snow.

Cathy Newman since that time has become one of the most prominent women in television, and in British journalism. She takes that status amidst trends suggesting that there are more women studying journalism around the world, and UCAS figures showing that women are outnumbering men in journalism programmes at universities in the UK.

At the time of her appointment, Newman had been with Channel 4 News for 5 years, joining as their political correspondent in 2006 after a career in print media, with The Independent, later the Financial Times.

Speaking up for the voiceless

In a telephone interview, Newman said the decision by ITN to appoint her as a co-presenter signalled a culture change in the role of women presenting news on television. She added that the ability to represent the diversity of the population was at the core of Channel 4’s principles as a network.

"It was an important statement for the programme to make," Newman said.

Journalism and storytelling is at the heart of what Newman does. Her focus is two-fold – encompassing not just the news of the day and the big interviews, but also projects and investigations, bringing stories she cares about to the screen.

Newman says it's more than just about being in the presenter's seat come 7pm.

"Our driving motivation is to speak up for those who don't have a voice," Newman said. "With the interviews we do, we don't take things at face value – we're questioning all sides of the story."

Newman credits ITN for the opportunities that have been afforded to her, even as sexism and discrimination continues to remain a concern in the industry. While at the FT, Newman was asked by senior management to recommend people to take on as reporters. One of the people she recommended was hired, but had earned £10,000 more than she did, considering the seniority of her role. She went to her boss about it, and got the pay rise overnight.

Newman said that instances of discrimination, especially to women, never leave you.

"Women who have climbed the ladder have done so in the amounts of discrimination," Newman said.

That instance led Newman to speak out and to champion women, and campaign for equality, to help women achieve their potential and achieve what they deserve. She hopes that the stats suggesting more women are studying journalism translates to change within the industry, and that women climb to the top of the ladder.

"I hope they feed through to change at the helm of newspapers and the screen," Newman said. "The proof is in the pudding."

Newman hopes for societal changes, for men to share stay at home parenting roles, and a revisit to the planning of work-life balance, in the hope that women can achieve their career goals. Newman says she gets support from her husband, who picks up their 2 daughters from school.

"What needs to change is that it shouldn't be the responsibility of the woman to pick up the kids," Newman said. "I'm surprised that more men aren't sharing that role. I want society as a whole to find it more acceptable to men to pull their weight and the question – is it necessarily what the couple want for a woman to backpedal [career-wise]"

Don't let the bastards get you down

Trolling on social media has also been a problem. Newman says while people are supportive, she has become subject to messages on Twitter. It was especially the case after her interview with the controversial columnist Milo Yiannopoulos of the US web site Breitbart, whose executive chair, Steve Bannon, advises the US president-elect Donald Trump.

Newman, citing the UK's vote to leave the European Union as well as the US presidential elections, says she wonders if these events have given licence for people to say things that wouldn’t have been said before. She says the views have been magnified by the echochamber of social media.

"I can't understand why we've descended to this level of vitriol," Newman said.

Newman says you have to ignore those remarks.

Newman advises any aspiring journalist to never give up and not take no for an answer. She also advises to network, write down every name and number you’re given and make contacts at the top to help give you the best stories.

Newman encourages women looking to go into journalism to believe in themselves, have confidence, and care less about what people say. She tells her daughters that there is no job out of reach for them.

In the end, Newman’s mission remains the same.

"My aim is to do the same job the blokes do." Newman said. "I love my job, I love the evolving nature. There are downsides, but there are huge opportunities. You need to be sure of yourself, and don’t let the bastards get you down."