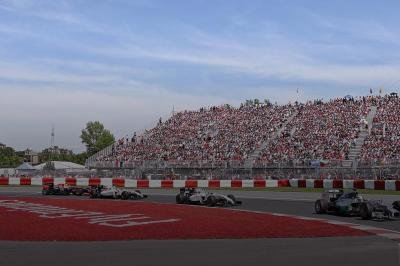 After two races in Europe, F1 heads to North America for the first time this season for the Canadian Grand Prix. After having two chances of a Grand Prix win snatched away from him, Daniel Ricciardo comes back to the track where he won his first ever race back in 2014.

This weekend signals the start of a busy period for the paddock with six races coming up in the space of eight weeks. A trip to Baku for the first time next weekend is followed up by a back-to-back races in Austria and Britain which is followed by a two week gap and then another double header in Hungary and Germany. Momentum is key.

Momentum is something no one other than Ricciardo has right now. Hamilton until his win at Monaco had a difficult start to his title defence whilst Nico Rosberg won race after race. Rosberg’s winning streak was only stopped after the infamous opening lap collision in Barcelona between the Mercedes pair. Rosberg’s headache worsened in Monaco with a seventh place finish at a race he has dominated in recent years.

Despite his recent woes it is Rosberg that still leads the way in the drivers standings. The German’s lead stand at 24 points heading into the weekend. Canada is a track that Lewis Hamilton has quite the record at. If he doesn’t finish the race in the garage early, he finishes on the podium. Perhaps the timing of this event is perfect for Hamilton who needs to start making up the points gap to Rosberg now.

The Circuit Gilles Villeneuve is situated on Notre Dame Island and features a combination of straight and high-speed chicanes. With plenty of chances for overtaking, the speeds high and the walls close. The margin for error is minimal as Robert Kubica found out in 2007.

Robert Kubica, 2007 Canada, Montreal… A crash that demonstrates how far Formula 1 has come in terms of safety. pic.twitter.com/3tFggATYL5

Turn 1 sees the divers tackle a tricky left hander which immediately feeds into Turn 2. There is plenty of room at Turn 1 for two cars and a dive up the inside is not uncommon. Turns 3 and 4 also come quick with a wall on the right hand side of the circuit inviting the drivers to use more the circuit.

Turns 8 and 9 are also tricky before another good over-taking opportunity at the famous hairpin before a long blast on the back straight before perhaps the most famous chicane on the calendar.

The drivers flick the car right and then left onto the main straight hoping they do not end up in the famous ‘wall of champions’ that has claimed a who’s who of drivers including Michael Schumacher, Sebastian Vettel, Damon Hil and Jenson Button to name a few.

The long straight leading up to the last chicane could play into the hands of Ferrari this weekend. The Italian outfit have confirmed they will bring a revised powertrain to Montreal which could give Mercedes food for thought.

Can Ferrari’s upgrade trouble Mercedes this weekend? Will Daniel Ricciardo finally take his first win of the season? Is Nico Rosberg going to taste victory after two shocking races? Or is this the point in the season that Hamilton begins to turn on the style and peg back Rosberg’s lead?

Leave your comments in below.