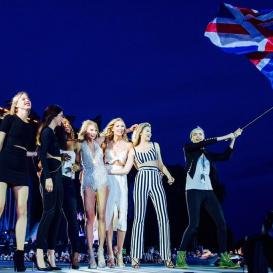 For many, the music festival at Hyde Park is worth the wait with big names like The Who and Taylor Swift across the weekend. I was lucky enough to get tickets to the Saturday where Swift headlined with preceding acts Ellie Goulding, John Newman and Vance Joy.

Having never been to an open air gig before, I wasn’t entirely sure what to expect, but having been a fan of Swift over the past few years I was really excited to see what she had to offer. It was a huge weekend for London with the Formula E taking to Battersea and Pride London taking over the streets so my morning train was jam packed as expected. I was quite surprised to see a group of six year old girls on the train accompanied by their mothers excited to see Taylor Swift. With tickets at over £60 they really were splashing the cash for the day.

I spent the morning and early afternoon meeting up with my friends in London and making the most of the glorious sunshine in Regent’s Park before we headed to Hyde Park. The gates opened from half three but we decided to arrive after 4 to let the queues die down. Walking towards the stage, which was dressed in trees and leaves, we saw a barrier raised between the stage and the space for the audience. A security guard informed us that the area in between was reserved for the first 5,000 people who had been in the queue as they were now eligible for premium access. As this hadn’t been advertised on the website it was a bit disappointing for us.

For the first couple of hours BST Hyde Park was great, with us enjoying cider on the grass as Vance Joy played in the background. We moved much closer to the stage for John Newman, whose set was sadly pretty bland, meaning that halfway through we left to go to the toilet in preparation for the next acts. The toilet queue was long but moved quickly and I was reliably informed by others that the previous night people had been forced to empty their bladders in the queue as the lines weren’t properly ordered and bottlenecked from the middle. Thankfully for us it was alright.

The lovely @vancejoy is treating us to an amazing rendition of ‘Stay with me’. #magic #BSTHydePark pic.twitter.com/cff3GBHSTk

Crowds aren’t great for anyone who suffers from anxiety or claustrophobia and I wasn’t sure how I would react to the ever growing number of people. I felt fine throughout Newman but as we waited the 45 minutes until Ellie Goulding would grace the stage the heat became unbearable from the sun and the people and I had to escape and sit down for a while as I felt a panic attack come on. Not ideal when I was so looking forward to the day.

After plenty of water and some breeze on my back at last I was able to enjoy Goulding as she started her set with one of my friends who had accompanied me from the crowd. Our view from further back was much better as we could actually see Goulding on the stage bouncing around. She came across as very sweet and her live singing was amazing. It was just a shame that she wasn’t on for longer.

Thanks to @elliegoulding for such a fantastic set! Next up is the Queen herself.. @taylorswift13!! #ahhhhhhh pic.twitter.com/0jBFq8xB6f

Meeting up with the rest of our group we headed towards the food stands where the queues were huge but we knew we had plenty of time until Taylor’s turn. There wasn’t a huge choice available with the sections split into pulled pork, burgers, chicken or fish but once we’d got our food we moved away to begin eating. With just under twenty minutes until Taylor was scheduled and one bite into my greasy pulled pork bap the chords of ‘Welcome to New York’, the opening track to Taylor’s latest album 1989, soared towards us. Swift started early, leaving us little time to enjoy our food before we found somewhere suitable to stand and no doubt a lot of fans were disappointed to miss the beginning or miss out on food.

There’s no doubt that Swift is a very talented woman. Not only does she sing and write her own songs, but she plays the piano (and keyboard) and guitar, all of which featured in her set. As her Hyde Park performance was the only London show of her current 1989 world tour it was pretty big, with plenty of backing dancers, costume changes and props.

We weren’t stood too far back but Taylor was only an ant to us and a lot of the onstage performance was lost. Her live singing was really good though and worth the trouble to see her. Over the course of her two hour set she performed all of her 1989 album along with ‘We Are Never Getting Back Together’ and ‘I Knew You Were Trouble’, the two top singles from her previous album Red.

Throughout the performance, after every few songs, Taylor took time out to speak to the crowd, giving us life and relationship advice as an introduction to each new set of songs. During her costume changes a video on screen of Taylor’s more famous friends (Selena Gomez, Lena Dunham and Cara Delevingne to name a few) gave us more advice and told us how great it is to be friends with Taylor. A lot of people around me seemed to enjoy these interludes but for me it all came across as a bit odd and it didn’t interest me as much as Taylor’s music.

spent tonight surrounded by badass girls and couldn’t be happier about it pic.twitter.com/R5pM0MHZia

During one particular speech Taylor told us how all 65,000 of us are now her friends, how we should all learn to love ourselves more and how she was taking mental snapshots of a night that she would remember forever. Hyde Park, and London, is a place that most acts would probably remember but after this world tour the more pessimistic of us (me, sorry!) couldn’t really see why she would remember this night over any others.

Taylor performed ‘Love Story’ from her second album Fearless, great for all fans of Swift’s older music but sadly she chose to perform it in her new 1989 style. It does go to show how versatile Swift is as an artist but I definitely prefer Taylor’s country music and if I could have swapped some of the time she spent giving us motivational speeches for performances of songs like ‘Mean’, ‘Mine’ or ‘You Belong With Me’ then I most definitely would have.

As has become tradition on the 1989 world tour Taylor brought out some of her friends for a catwalk down the stage. Kendall Jenner, Gigi Hadid, Serena Williams, Karlie Kloss, Martha Hunt and Delevingne sauntered down the stage to the sounds of ‘Style’, relatively ironic as the song is allegedly written about One Direction member Harry Styles who has, if we believe the rumours, dated Swift, Jenner and Delevingne. This showing off of friends doesn’t really do much for me but plenty of the girls around me were absolutely ecstatic. Photos later revealed that Emma Watson had been backstage the entire time and she would definitely have been one celebrity who I would much rather see.

Aside from all this, Taylor’s performance was pretty spectacular and I am glad I saw her. However, next time a concert with more organisation and a decent view would be preferable. Ellie Goulding really made the day for me as I’d totally forgotten how many brilliant songs she has and I would love to see her in concert. Taylor and her 1989 sound were great but I hope despite her fame and fortune (with Calvin Harris she recently overtook Beyonce and Jay-Z as the highest earning couple) she remembers little country Taylor who made this all a possibility and who many people prefer, including me.

Did you manage to see the concert? What do you think of Taylor? Leave your comments below.