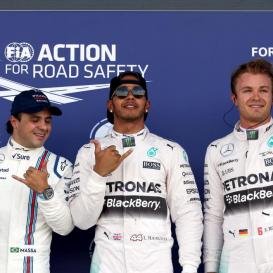 Silverstone is the holy grail of Formula 1 for not only British fans and drivers but the majority of the racers on the grid. The circuit is a classic and a win or podium finish here is up there with the greats of Monaco and Spa.

It was a predictable qualifying for the top dogs with Mercedes’ Lewis Hamilton taking yet another pole position, his team-mate Nico Rosberg firmly in second. For Hamilton it looked set to be a great race with plenty of support at his home grand prix.

Williams had a great opportunity presented to them, locking out the second row ahead of the Ferrari’s. With the Mercedes seemingly uncatchable and Felipe Massa holding out over Sebastian Vettel in Austria a fortnight ago it was all to play for.

8th pole of the season, wow. I can’t believe it. Thank you to my amazing team! @MercedesAMGF1 #BritishGP #TeamLH pic.twitter.com/8r27UqsfaQ

As the cars made their way to the starting line Felipe Nasr’s Sauber stopped on track, finishing his race before it had even begun. The weather was looking sunny, particularly for Britain, but rain threatened for the latter stages of the race.

As the start got underway both Hamilton and Rosberg had an appalling beginning, being overtaken by both Massa and his Williams team-mate Valtteri Bottas. Williams had a huge chance as they held on to the lead but a team mistake is surely what threatened their race. Bottas was the stronger looking driver out on circuit but he couldn’t quite find a way to get ahead of Massa and as the team told them not to race it proved detrimental to both drivers.

An incident involving both Lotus’ and both McLaren’s wiped out three of the four cars in one quick swoop. Pastor Maldonado lived up to his nickname ‘Crashtor’ as he took out his team-mate Romain Grosjean before retiring a little further on the lap.

As Fernando Alosno swerved in an attempt to avoid the Lotus tussle he accidentally took out his own team-mate Jenson Button, much to the dismay of British fans. Button has never managed anything more than fourth at Silverstone and it was another disappointing performance for the Brit.

There were plenty more retirements throughout the race as Max Verstappen spun off the track and crashed, his team-mate Carlos Sainz also pulling to a stop later on in the race. Red Bull’s Daniel Ricciardo had another torrid time, retiring with suspected electronic failure, his performance a far cry from his three race victories in 2014.

Alonso managed to keep it together, finishing in the points for the first time this season. McLaren Honda have made no new leaps in recent weeks and without the other retirements there probably would have been no chance for Alonso to sneak into the top ten.

It was the four at the front that provided the most action at Silverstone as the Mercedes pair struggled to gain on Williams. Following the safety car, deployed after the Lotus/McLaren mishap, Hamilton was in second place but a lock up left the door open for Bottas to move ahead.

Hamilton was the first to pit and a fantastic stop led to him taking the race lead. Rosberg and Massa were head to head exiting the pit lane but it was the Williams who came out on top and the German was left down in fourth by the next lap as Bottas exited ahead after his pit stop.

As the race entered the last 15 or so laps light rain fell across the track and Rosberg was able to capitalise on this by overtaking both Williams’ to move into second. Hearts stopped across the country as Hamilton and the team made a call to pit for the intermediate tyres – would it be another Monaco? Luckily for the Brit it was a great call and he continued to lead the race until the end, Rosberg finishing in second. Hamilton has now won the British Grand Prix three times, putting him in an elite group of champions.

The rain lost Williams the race as the team consistently ignored Bottas’ calls for intermediate tyres. When the team eventually changed the tyres for both cars it was too little too late, leaving them in fourth and fifth and wasting the chances that both drivers had worked so hard for from the start of the race.

Ferrari had a pretty quiet race, Kimi Raikkonen leading Vettel for the majority. Raikkonen came in for the intermediates much too early and finished in eighth, having once been up in fifth. The pit stop strategy worked perfectly for Vettel as he managed to sneak into third and take the final spot on the podium. The Force India’s had a practically silent race, Nico Hulkenberg in seventh and Sergio Perez in ninth, with nothing of note to occur to either. Red Bull’s Daniil Kvyat managed a sixth place finish.

For a race prone to drama Silverstone certainly delivered and it was the perfect result for all British fans of the sport. Hamilton has now extended his championship lead over Rosberg by 17 points and the season is surely going to build to another huge climax.

Formula 1 takes to Hungary for the next race in three weeks’ time, where the race win went to Ricciardo in 2014. A repeat of that this year looks highly unlikely.

Did you enjoy the British Grand Prix? Leave your comments below.