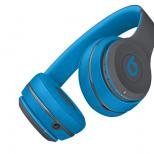 One of the products that’s crossed my desk recently is a pair of headphones. They’re blue leather (I assume it’s leather, or else that is supple as hell and feels like leather) and grey soft touch plastic, with various metal pieces of accenting. They’re incredibly sleek, and look every bit as good as you would expect given that they are a) expensive and b) Beats, a company that was known for its design practices even before they were bought out by Apple, a company famous for design. They’re also wireless, with a full complement of onboard controls to boot. I hitched them to my phone, and a few other devices, and each time, it was a breeze. Then I began the testing. There is a whole lot to say about these cans, and I’ll try and say it, but here’s what you need to keep in mind throughout this whole article: the RRP of these things is £270. So, without further ado, cue the music, and let’s begin.

The most important measure for any headphones, earphones, speakers etc is how good they sound. This is one of those areas that’s quite difficult to convey without actually listening to the device, but I’ll do my damndest. All Beats models are well known for their bassy signature, which isn’t a surprising, given that they are the spawn of Dr. Dre. It says on the box that these headphones aim to provide a wider range of sound, because, in the words of Dre himself: “People aren’t hearing all the music.”

However, given the bass, the idea that these would provide an amazing range of sound kinda stayed on the drawing board. If you’re moving from the standard earphones that came with your smartphone, the difference going to these is gargantuan. It will feel like you’re hearing all the music. But realistically, few people go from basic earphones infamous for sounding rubbish to these. It just doesn’t happen. It’s more likely that you’d be moving from headphones in the £100 price bracket, perhaps a pair that aren’t wireless, to these. And the truth is, you’ll notice very little in the way of sound improvement.

I also have with me the non-wireless model of this very pair, and the wireless ones actually sound worse. The issue with wireless headphones is that they need to power themselves, and that means they simply cannot be as bassy (which is surely the whole point of Beats). Another issue here is that the bass (the lows) sometimes drowns out the mids, which is particularly problematic for genres like Classical, Opera, Musicals, Acoustic, etc. But I’m not blind to the fact that Beats are marketed for people who really like bassy, thumping music. I managed to get hold of the Compton soundtrack in FLAC (high quality audio) format, and through these, it just sounded blow-away-brilliant. But for anything else, these cans sound fairly muddy. In summary, these sound good, but not great, and certainly not as good as headphones for this price should.

From opening the package to actually wearing these things, Beats are the best designed headphones in existence. That’s all there is to it. I won’t ruin the surprise of opening the box (not that there aren’t numerous unboxing videos on YouTube), but rest assured it’s lovely. The headphones come with an audio jack cable, in case your device doesn’t have Bluetooth (maybe you’re going to try plugging these into a typewriter), as well as a charge cable, and a neoprene carry case. The carry case isn’t hard backed though, so if you stick it in your rucksack and it gets bashed around, I’m not sure what it will do. Not to worry though, because these headphones are solidly built. In fact, everything about their physical form is damn near perfect. They look gorgeous, although I’d think about getting a model in a different colour to the one I’ve got. They fold, they feel good, they’re comfortable for hours on end.

My only real complaints are that the cups don’t fold flat, which would make them so much easier to carry, and that the included cable isn’t a flat, anti-tangle cable. For this price, that level of thought should really be included in the design. I realise for a great many people, buying Beats is buying into a brand and a culture, it is a statement: don’t worry, the distinctive b logo is all over the place so no one will be in any doubt as to your affiliations. You get the general feeling with these that they’ll last: everything feels intelligently designed and put together, and not a single component here feels inexpensive.

Are these the best headphones you can buy for the money in terms of raw sound? No, absolutely not. This is especially true of sound that depends on mids and highs, where these headphones are really lacking. But for any sound, like gaming, rap, drum&bass, electronic and house, where the lows are the central part, these are top notch. But the sound almost doesn’t matter: Beats are a fashion piece, a design statement. And they look so good, and are designed so well. The pricing almost begins to make sense here when you consider these as a fashion item; after all, a pair of high end trainers now costs £200. These headphones are killing it for a wireless commute or gym session, and if you’ve got the cash, and they’re musically suited, why not?

Thanks to Beats for the review unit and the images!