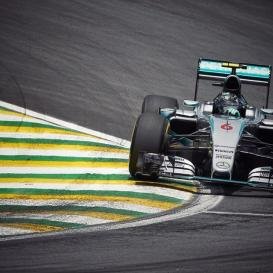 It was business as usual throughout Q1. The drivers took their time heading out onto the circuit with little incident throughout. Fernando Alonso’s torrid season took another blow when his Honda power unit gave up, ending his session early and instead of rushing back to the McLaren garage, the Spaniard opted to grab a chair and catch some sun watching the cars circulate the track.

When your cars so crap you’d rather catch some sun instead. #F1 pic.twitter.com/NmkmJTA14o

There was a hairy incident involving both of the Brazilians at the end of Q1. Felipe Massa was trying to book his place into Q2 and caught traffic. Felipe Nasr did not see Massa and was driving slowly on an out lap on the racing line. Nasr failed to get out of the way of Massa and forced the Williams off the track. Thankfully, the pair managed to get into Q2, however, the incident is currently being looked at by the race stewards.

Hamilton topped Q1 narrowly ahead of Rosberg. The drivers that were not so lucky and took an early bath were Pastor Maldonado, Jenson Button, Alexander Rossi, Will Stevens and Fernando Alonso.

The Mercedes battle continued into Q2 with Hamilton leading the Mercedes battle at the top of the times by a comfortable margin of over half a second. At this stage it looked good for Hamilton to take his first pole position since the Italian Grand Prix at Monza in September.

Although Mercedes were cruising the Silver Arrows did not finish one and two in the second session. A drop in track temperature meant that the track was getting quicker and played into the hands of Sebastian Vettel who ended Q2 in second place. Vettel joined the action in the later stages, the German’s time two-tenths shy of Hamilton’s 1:11.665s.

Sergio Perez had a difficult day and failed to make it into Q3 along with Felipe Nasr, Carlos Sainz, Marcus Ericsson and Romain Grosjean who had a huge spin in the second session and was lucky to keep his Lotus out of the wall.

In his first run in Q3 Rosberg put down a marker instantly by setting the early pace, just over a tenth of a second quicker than Hamilton, it was from there it was clear that no one would be able to touch the constructors’ champions. Whilst Rosberg had provisional pole, it seemed as if there was still time to come from both Hamilton and Vettel who made small errors on their initial runs.

In the final runs the Mercedes pair matched each other sector for sector, with just .076s separating Rosberg and Hamilton. Valtteri Bottas qualified​ his Williams in 4th place but faces a three place penalty following his collision with Raikkonen at the last race in Mexico.