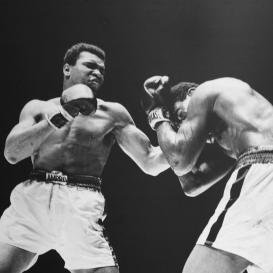 The boxing legend and former world heavyweight champion Muhammad Ali has died in hospital in Phoenix, Arizona at the age of 74.

Born Cassius Clay in Louisville, Kentucky, in 1942, he took up boxing initially at the age of twelve and at the age of 18 he won gold at the Rome Olympics in 1960. Launching his professional career he shocked the US in 1964 when he embraced the Nation of Islam and dropped his ‘slave name’ to become Muhammad Ali.

“It’s hard to be humble when you’re as great as I am.” #MuhammadAli pic.twitter.com/yFk7VDK636

Ali risked his career and reputation to oppose the Vietnam war, and refused to serve in the army citing religious beliefs. He was stripped of his title, boxing license and was found guilty of an offence at a trial in 1967, four years later the supreme court reversed the conviction.

As a boxer, Ali was peerless for much of his career. His ability to dance around his opponent like he was a lightweight, taunting them with his lightening reflexes and delighting the crowds with his showboating antics.

In 1974 Ali had probably the biggest fight of his career when he defeated George Foreman in the Rumble in the Jungle in Zaire (Now the Democratic Republic of Congo). Spending most of the first eight rounds leaning agaisnt the ropes dodging puches (a tactic he called ‘rope-a-dope), and came back to send Foreman to the canvas with a brutal combination.

Ali retired at 40, and soon after rumours emerged about his health, Parkinson’s disease was eventually diagnosed, but this did not stop Ali from remaining in the public eye, devoting his time to philanthropy and activism.

A global hero, tributes have been pouring in.

A giant among men, Ali displayed a greatness in talent, courage & conviction, that most of us will EVER be able to truly comprehend. #RIPAli

Ralph Ali, Frazier & Foreman we were 1 guy. A part of me slipped away, “The greatest piece” https://t.co/xVKOc9qtub

RIP to the GOAT. A man of character, faith, dignity and professionalism. You’ll continue to… https://t.co/7poPFS2TAz

How Ali wants to be remembered.#RIPMuhammadAlihttps://t.co/1EeAmveAU7