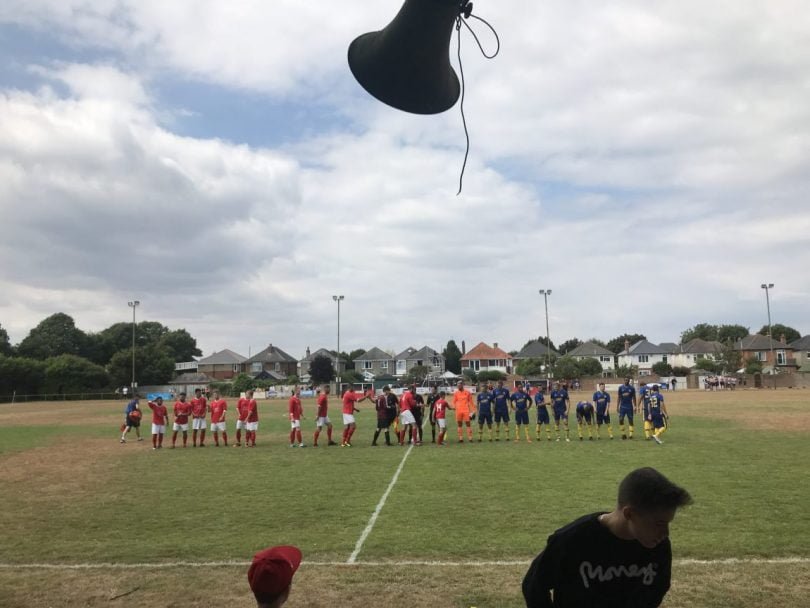 As I was travelling along the south coast from Brighton to Bournemouth on Saturday, about to get my first taste of a live Hashtag United game, I had a genuine feeling of excitement. I have been following this YouTube team since it’s creation back in 2016 and, even back then, I could see the potential this team had and I knew, I had to get involved. The growth of Hashtag has been so strong over the last two and a half years that founder Spencer Owen has decided to enter them Into the non-league ladder, nine divisions below the Premier League. Hashtag United are now a semi-professional team.

Going into this match I did have one query on my mind; would they be able to transfer their incredible online support into real life, die hard, season ticket holding fans? I must say the answer to that question is an emphatic yes! What hit me straight away was the sheer velocity of the support this team had. There must’ve been a couple hundred fans at least who had turned out to watch their new idols take on one of their local sides, cheering them on from the first whistle to the last. Don’t forget this was only a pre-season match as well, nearly 3 hours from their new home. Hashtag’s supporters do really come from far and wide.

As any football fan will tell you, pre-season is not about the results. It is a chance for the manager and his coaching staff to rotate the squad, improve fitness, and find out who their strongest team is going into the new season. With this is mind there were a few notable absentees from the Hashtag team such as keeper Andy Jeffs-Watts, defender Jemel Akeem and wingers Seb Carmichael-Brown and Theo Baker. It was a chance however for a few trialists and players from the Sunday league team to earn their spot in a highly contested squad.

The game started with a surprisingly high tempo to it. Hashtag seemed to be playing a high press which was not letting Bournemouth Poppies settle. It was from a mistake at the back though that led to the first goal, confusion between full-back Marcus Stamp and keeper James Jackson over who was taking a free-kick, Stamp played the ball across field straight to a a Poppies attacker who had an empty net to score in. The visitors struggled to get going in this match and they found themselves 2-0 down after 20 minutes when a switched ball from the left found left back Alex Dakhnovskyy marking two men, with one of them managing to squeeze the ball past keeper Jacko. It was evident the home side realised early on that they were most effective either playing long balls over the top or using the long throw method, at this point Hashtag had not found an answer to them.

The game had threatened to run away from Hashtag as Bournemouth scored another, only for the referee to disallow the goal for a foul. This had come after a number of corners that the visitors could not deal with. A let off for Hashtag. A quick water break on the 25 minute mark and a chance for Spencer to rally his team, they had not impressed thus far.

Whatever Owen said to his players must’ve worked as they seemed to realise they were in a game of football, and halved the deficit as Dan Brown scored a tap in from a corner, after a good header back across goal from Jack Harrison. Game on. The visitors were on top now, enjoying the majority of possession and they soon equalised with just under 10 minutes to go until half time. A nice run from right back Marcus Stamp who then picks out Brown, he in turn plays a one-two with winger Aaron Couch, one of the trialists, and Brown finishes nicely to bag his second of the game. This was much better from United and they weren’t done there. Some good work from Charlie Morley and Jack Harrison pressing high on the Poppies defence, the ball gets played to the right back, who finds himself in a centre back position, he is then dispossessed by Ryan Adams whose shot hits the post, but it falls to Johnny on the spot Dan Brown to complete his hat trick and an incredible first half turnaround for Hashtag.

Half time and it’s Hashtag United who lead this one, 2-3.

Going into the second half and the visitors make 3 changes; off come Charlie Pardoe, Charlie Morley and Alex Dakhnovskyy and on come Rich Beck, Scott Willard and Lee Hursit. It’s a tight second half, not many chances, with neither team really able to get going. Another scare for Hashtag though, who haven’t really been able to deal with the set piece threat of Bournemouth, as the Poppies man has a free header but puts it wide. Should’ve done better. More subs now as Wes Tanser and Maverick Gore replace Tekkers Guru and Aaron Couch. Trialist Couch has impressed today. Hashtag also change their goalkeeper, bringing on Ryan Barker with 20 minutes to go. Barker’s first job however is to pick the ball out of his net as Poppies equalise! A bit of a controversial one too, another long throw into the box and it appeared to go all the way in, however the ref has deemed it took a touch off someones head and we are all tied up.

Full time and the game ends 3-3. Loads of positives to take from the game for Hashtag, but plenty to work on for Spencer and new manager Jay Devereux too. They didn’t get going early on and had to rely on the clinical finishing of Dan Brown to get them back into the game. Perhaps a bit of organisation needs to be worked on too for set pieces and throw ins.

After the match I caught up with keeper Jacko, who had this to say about the game. “We were poor today, we were really good last week, we played really well last Saturday but I think we’ve come here today with a bit of a different attitude and I think we’ve let ourselves down. Disappointed with the result and the performance wasn’t great either.”

I also spoke to defender Sam Adams and he told me about chapter two, Hashtag’s new manager Jay Devereux and how pre-season was going. “Yeah it’s definitely a new start, it’s completely chalk and cheese from what we’ve come from, exhibition matches. Devs in, the new manager, he’s very tough, very strict and we’re moving into this non-league stage and it’s good. Fitness is a big thing but thoroughly enjoying it and hopefully I can keep my place in the squad.”