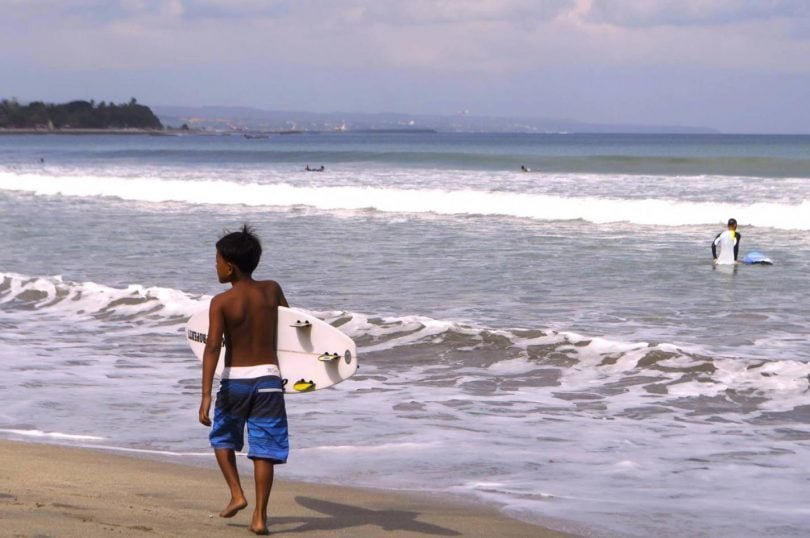 After moving to Indonesia I decided to try surfing. I and my friend travelled to Bali and by chance we were hosted by a surf instructor. After four hours and countless of failed attempts, I stood up on the board and it felt amazing. I kept chasing the waves just to feel it once again. No wonder that when I got a possibility to move back to Indonesia, the first trip I really wanted to do, was to go to the beach.

Indonesia is famous for it’s countless stretch of beaches, but not all of them are good for surfing. In some waters the sea is smooth as a mirror and you could die waiting for any waves to come, in others waves are humongous and if you’re not sure what you’re doing you can end up crashing against the rock or being carried away by the currents to god knows where.

If none of the two scenarios appeal to you, take a look of these five beaches I have picked and tried out for you.

Pacitan is the best choice for shy surfers who would like to polish their skills in complete solitude. Believe it or not but during my four day surf holiday I spotted exactly one walker on the beach. The ocean was solely for me. If you have ever surfed before then you know that it’s not that easy to find beach that is completely for you to use. More popular surf resorts are always full of pros and newcomers. Being in the water often means that you have to fight for waves and look out that nobody is going to crash your board. In Pacitan you don’t have to worry about any of these things. In the whole area I only saw 4-5 surfers who were riding waves in nearby beaches. Of course it was low season, but as much as I have heard the tourist haven’t really found it out yet and it’s quite calm even in high season.

Pacitan is five hour bus ride away from the culture capital of Indonesia, Yogyakarta. There are couple of guesthouses and simple restaurants that serve Indonesian food.

Waves in Pacitan are not big, but they are coming regularly, so you don’t have to yawn on the board for long. Surfing needs patience. When it doesn’t work at first day, don’t give up, but try again next day. You’ll be pleasantly surprised noticing that your skills have actually gotten better. The third day I went surfing with a friend, but waves were so crazy, that instead of surfers we reminded more drowning sailors. The whole adventure ended with us escaping from the huge wave back to the dry land. We survived and decided to go to hot springs instead.

In addition to surfing beaches you can find there beautiful paradise beaches with white sand, clear still water and the nicest seashells you have ever seen.

Due to the lack of tourists, it’s still very cheap to surf in Pacitan. You can rent the longboard for about £4 per 24 hour.

Eight hour train ride away from Yogyakarta lays beginners surfing paradise- Batu Karas. We enjoyed there a real weeklong surf holiday waking up early in the morning and getting out of the water only after it went dark. If after surfing 3-4 hours in Pacitan I was so tired that I couldn’t think of more surfing then in Batu Karas I didn’t feel anything close to that. What was missing were the waves.

Surfing in Batu Karas means lying on the board instead of surfing. Asking to a local surf instructor, where were the waves, he said that January it’s not a season here. Seemed like all the travel guides had got it wrong. Well, what to do. We tried to get the best out of our time there.

Soon I noticed that the frequency of waves increased  around 4pm. Sadly, everybody else had noticed it too. The water was not crowded, but if everybody tried to surf the one and only wave it got a bit cramped. The problem with waves there was that they were good only straight next to the rock. Meaning that the closer you go, the better it is to catch it. But I didn’t go that close since my surfing skills are not good enough to guide the board to safer waters if something would have happened. But the wave was nice and long. It was not very strong so you really needed to paddle a lot. It was perfect for one 6 year old girl who was light enough for the wave. She rode the wave for 10-12 meters every day.

On our last day the waves finally came and we got to surf as much as we wanted. It was lot of fun, especially when I didn’t fell back into the water straight away after standing up. The feeling that you really stand up and surf was wonderful.

Batu Karas is the closest surf beach to the country’s capital Jakarta. That means better facilities like western food and beer that you cannot find in Pacitan. There are also couple of surf shops.

It’s not recommended to stay on the main street. Instead try to go little further. We found the whole house with bedroom, living room, kitchen and balcony with view to rice fields for very little money.

If you get tired of surfing, rent a bike and visit Green Valley, where you can swim in the river, jump from cliffs and waterfalls, play Tarzan and explore the caves. An amazing jungle experience is guaranteed.

Surfboard in Batu Karas costs £4-£5 from sunrise to sunset.

Kuta is probably your first stop in Bali. Unless you’re diver, then you’ll probably head north for calmer waters. South shore is a surfers playground.

Kuta itself is very touristic and full of Australians. Nightclubs are full no matter which night you decide to go and streets are turned to souvenir stalls. Differently from other places in Indonesia you can find there  all kind of food, alcohol and drugs. Walking in dark streets you hear endless repetition of: Taxi! Mushrooms! Marihuana! Cocaine! The local taxi drivers can deliver you whatever you want.

You can’t find here traditional Balinese rituals, temples and clothes. But if that doesn’t bother you than Kuta is definitely place for you.

Kuta beach is not exactly an untouched paradise but its waves are perfect for beginners. When you go without instructor be careful not to jump into advanced waves. At least I wasn’t ready for that yet in my 14th time of surfing. Be sceptical of instructor’s words. Sometimes they just want to rent you the board assuring you that you’ll be fine, even though it’s little bit too difficult for you. It possible that they send you to advanced waves on purpose- so you’d come back and hire an instructor afterwards.

I made this mistake and it was pretty scary experience. I was swallowing lot of water and wondering why all of a sudden I suck so much in surfing. After couple of hours struggling, the water got filled with other beginners. Waves were not so strong anymore and I had lots of fun riding them The funniest moment was when I was lying on the board, wave came but I decided to leave it and go for the next. But the wave had other plans. It took me, even though I had no intention to stand up, and catapulted me straight to the beach. It was amazingly long ride and the only thing I regret is that I didn’t stand up.

Neighbours Kuta and Semanyak are as different from each other as night and day. There’s no point to try to find cosy and carefree surfer’s life in Semanyak. Nope, Semanyak is the paradise of rich and beautiful. Beach chairs are occupied by pretty girls with their pocket dogs, town is full of villas hidden behind high walls, and ridiculously expensive restaurants. It requires lot of time and patience to find cheap accommodation here. Same goes with food. The most common street food nasi goreng (fried rice) costs there £8. It doesn’t sound that much now, but knowing that in my previous hometown I never paid more than a dollar for that, makes it seriously ridiculous. The surfboards were also more expensive. Their price was £8 per hour.

But surfing in Semanyak was nice. There were lots of waves, all having the right strength and size. You didn’t have to pedal as much as in Batu Karas. Semanyak was also perfect for exercising your balance. The only advice for beginner would be not to go for very strong waves- you’ll probably not going to manage. Other than that the beach is great for practice.

Canggu is again completely different from the previous beaches. It’s not a beautiful white sand beach where girls are stretching their long legs. Neither it’s a beach where tourists come to test  their alcohol consumption limits. Nope, it’s more for surfers, their boyfriends girlfriends and families. Hipsters are having beers on the stairs while checking out the last surfers during the sunset. Everything is bit rundown, but at the same time you feel like home. You can just sit down and eat your roasted corn without worrying that the grass you’re sitting on belongs to some luxury hotel or that some party boy will puke on your head while you’re enjoying the sunset.

First time being in Canggu I fell in love. Waves were just right. I had enough time to prepare and select. At the end I was even pedalling towards the wave like a real surfer. The water was filled with all kind of surfers. I remember a girl who was making a headstand on surfboard. I surfed until I dropped.

I returned to Canngu four months later. I took a board and stepped proudly towards the waves until the first wave throw me into the sand head first. I was terrified that I would drown and escaped. I coughed sand and decided that for some time now, I’m not going to get in.  After some time sitting on the beach, I still decided to give it another try. I realised that the dangerous part was only the beginning. It was much easier to surf further away from the sand. But I didn’t feel that comfortable anymore with the drumming thought in my head saying that I had to get out somehow and going out meant going through the whirlpool waves in the beginning . Finally out I was sitting on the board next to my boyfriend, relieved, looking how the waves calmed slowly down.

The price for the board is in Canggu £4 until sundown.