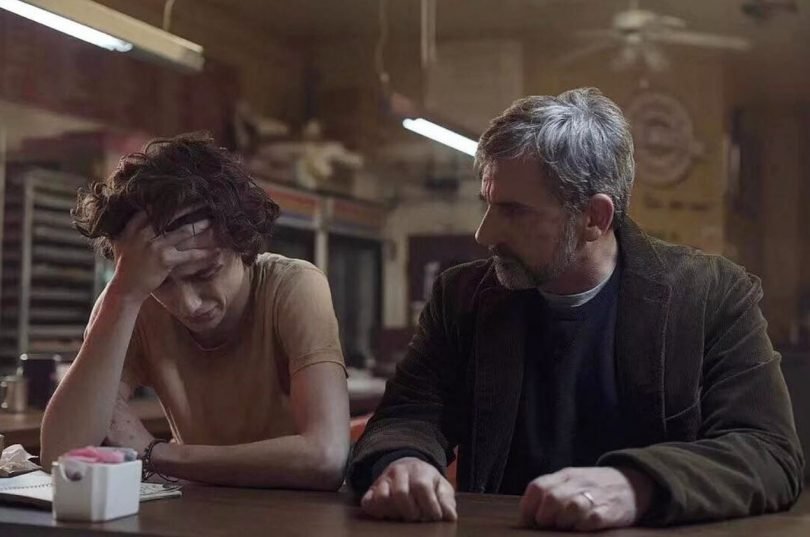 “This isn’t like cancer, this is my choice, I put myself here”
“ There are moments that I look at him and I wonder who he is”
“I need to find a way to fill this black hole in me”

These are just some of the grippingly emotional quotes from Amazon Studios’ trailer for Beautiful Boy’, a film based on author David Sheff’s memoirs A Beautiful Boy: A Father’s Journey Through His Son’s Addiction and Tweak: Growing Up on Methamphetamines. The biographical drama starring Oscar nominees Steve Carell as David, and Timothée Chalamet as David’s Son Nic, is set to convey the story of Sheff’s son’s struggle with addiction to methamphetamine and the impact this has on his family. It will be released in the UK on the 18th of January 2019.

The trailer, in its short form, portrays the difficulty in escaping addiction, cutting from intense conversations between Nic and David where he criticises his dad for being controlling all the time and Nic claiming that ‘It’s hard as hell to get sober’ but he loves his family and wants them to be proud of him. We see David as a father struggling to cope with his son’s overwhelming sense of disappointment in himself and his identity, often reflecting on his son’s childhood and the kid he ‘thought he knew inside out’. In a particularly heart-wrenching scene, David admits that he once dreamt of Nic going to college and now he’s just trying to make sure he does not die.

Felix van Groeningen who directs the screenplay expresses that “I want to celebrate life through my films. I try to understand what each character goes through, and I hope the empathy I experience is felt by the viewers too.” Hopefully, this is a film that will vividly expose the complexities of addiction rather than shying away from illustrating the monstrous effects of hard-core drug abuse, the lengths and effort it takes to achieve sobriety and the strains this has on relationships. There is a misconception that drug abuse is predominantly for recreational use when in reality it is widely used as a means to escape disillusionment, a notion which Groeningen aims to capture. It is evident in the trailer, that the dynamic between Nic and David will be a central focus of the film, however, I hope that van Groeningen explores thoroughly explores the dynamic between Nic, his mother, step-mother and siblings, conveying their experiences with Nic’s addiction as opposed to limiting them to the background.

Overall, I think Beautiful Boy will be a compelling, heavily-emotional and timely film that will present moving performances from both Carell and Chalamet. A film that showcases the struggles of addiction is important, especially now, where the abuse of prescription drugs such as Xanax and opiates are being glorified in popular culture through rappers such as ‘Lil Pump’ and the number of people dying from drug abuse is rising. As Timothée addresses in an interview, “It is a story that needed to be told. Crystal meth is the biggest killer for people under fifteen-years-old. It could happen to anyone regardless of gender or age or class. It does not discriminate”.