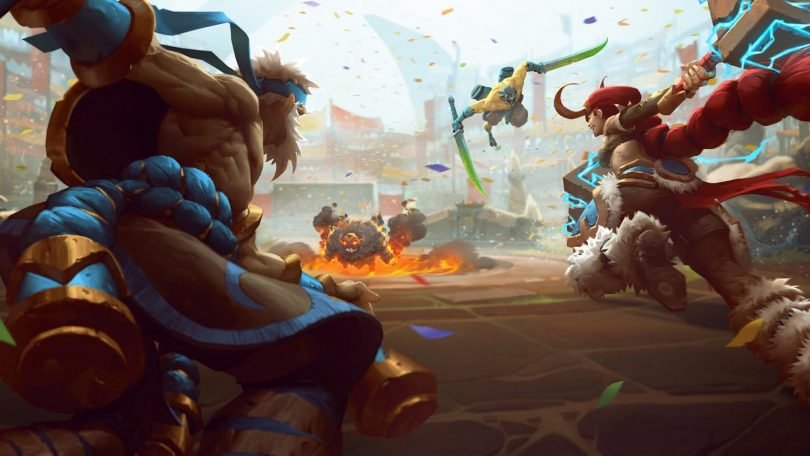 Battlerite is a common ground where fans of every arena style game both MOBA and shooter can come and have fun. It takes our favourite experiences from games like League of Legends, Dota, and Smite, and presents them in a package that is palatable for all.

The games takes place in a gladiatorial style arena where you fight it out player versus player with no minions, either 2v2 or 3v3. Where Battlerite really shines is its fast-paced action combat, everything is skill shot based on the need to constantly aim abilities and attacks, which feels fluid and when you pull off a really great combo it feels rewarding. With a colourful cast of 15 champions of different designs, there is room for all playstyles. The more interesting factor is the round by round Battlerite system. Each round you are able to choose a power up that augments your skills (known as a Battlerite), these come in multiple categories such as Survival, Control, Offensive, Support, and more. This allows you to adjust your strategy and leaves room for countering on a round by round basis, potentially changing the tide of a game. The game ends when one team wins three rounds and usually, this is quite quick.

As a newbie, one might be put off by the high skill cap that Battlerite has. The game itself is very easy to pick up as a concept but playing at a higher level will call for good reactions and hand-eye coordination. My main criticism of the game would be the lack of balance in the available champions. Some champions, such as Poloma and Ashka, are deadly in the right hands, and I found others such as Iva and Taya in need of a buff.

For £14.99 Battlerite is an Early Access gem and one I’d fully recommend picking up. The game has already attracted a growing following on the Steam forums and I can only see the momentum growing as the development progresses. The game will be free to play on release if you want to wait however but early adopters will get a unique avatar and title, as well as access to all the champions and any future champions. Given the cost of unlocking champions in similar games such as Dota and League of Legends it seems well worth it, and should you want to support them even further there is a £22.99 ‘Ultimate Fan Pack’ which includes a hilarious goblin carried throne, unique avatar and title, special coloured text, a permanent 10% Champion XP bonus which is given to you and anyone you play with, and 5 gold cosmetic chests (Although please note that the cosmetics are exceptionally bland and limited currently).

When I look at Stunlock Studios I am excited because I see a rise to fame that might mimic Riot Games and place Battlerite as one of the biggest competitive games in the world. It’s a breath of fresh air and with 200,000+ players and the top earning and reviewed game on Steam of 2016, it’s looking like a hype train you should probably jump on early.