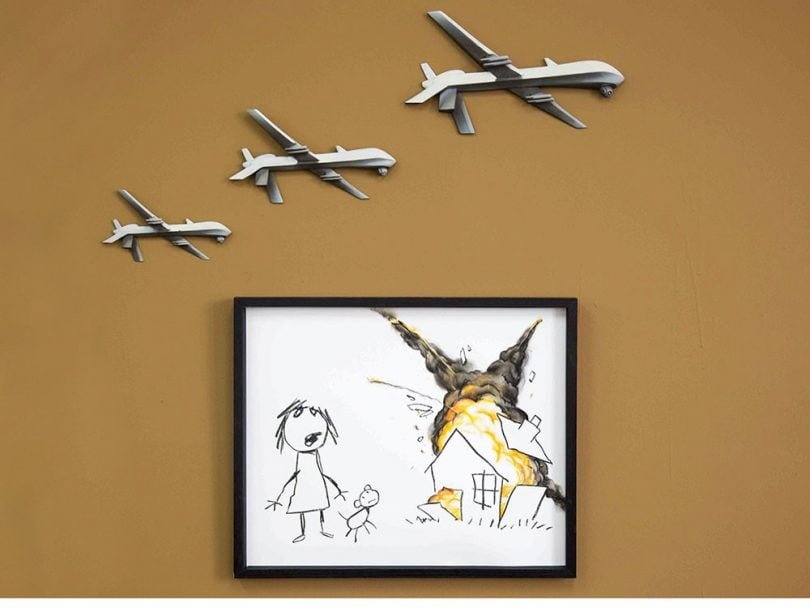 In a bit to highlight the inhumanity of the arms trade, Banksy’s Civilian Drone Strike was displayed at the Art the Arms Fair, alongside the world’s larger Arms Fair, the Defence and Security Equipment International (DSEI), in east London.

Civilian Drone Strike exhibits three drones bombing a house while a child and her dog look in affliction.

My contribution to the Art the Arms Fair exhibition, which opens opposite the world's biggest arms fair – held this week in London.

Joe Lo, researcher of Campaign Against Arms Trade, said: “The Arms Trade causes repression and war around the world.

“The assault on Yemen which has been happening for over two and a half years now has a devastating impact on the people of Yemen.

“The DSEI Arms Fair is where a lot of those deals are done leading to death, destruction, internal oppression and the abuse of human rights.”

During the Arms Fair, military equipment was displayed, from machine guns, sniper rifles and pistols, to tanks and hi-tech protective clothing.

When the horror in #Yemen is revealed in full, the UK will not be able to say, "we did not know" #StopDSEI https://t.co/PmuQHKrJ4i

The Art the Arms Fair claimed that most people haven’t heard about it because the arms trade doesn’t like people knowing about their deals to despotic regimes.

Mr Lo added: “The donation we received from Banksy will be put into our hardcore work of confronting the Arms trade. What we do is campaign work and a lot of research into the effects of Arms trade on people in the UK and around the world, as well as, researching the political influence of it over our government.”

Mr Lo said their cause is “popular amongst the public and that many people think we shouldn’t sell any weapons to countries like Saudi Arabia which has bad human rights and regimes.”

He added: “The people who support the arms trade are a very small minority. We have also got a lot of support among UK politicians and every single party apart from the Conservatives. In their manifesto they wanted to export to Saudi Arabia which has been the biggest buyer of the UK arms. Over 100 people were arrested protesting against the arms fair a few weeks ago, we have got a lot of active supporters in the general public and the Parliament.”

Banksy has earned himself a notorious reputation through his politically influenced artwork. In June, he asked Bristol voters to turn against the Conservative party in exchange with free, exclusive prints.

Banksy’s unique artwork can be found on his website.