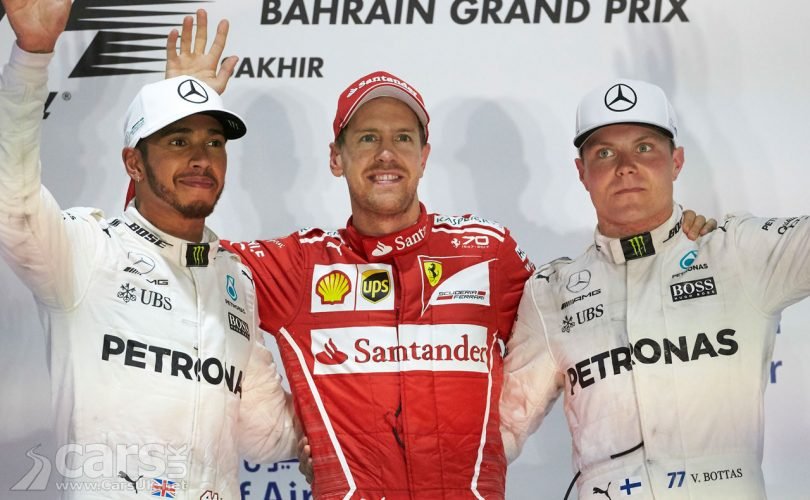 Sebastian Vettel saw off a late charge from Lewis Hamilton to win the Bahrain Grand Prix on Sunday afternoon. Hamilton was hit with five-second penalty which cost the Mercedes driver a chance of winning the race.

The German made the most of a good start and was ahead of Hamilton at Turn 1. Despite early pressure from Vettel, pole-sitter Valtteri Bottas was able to deal with Vettel's pace but it seemed as if it was only a matter of time before the Ferrari would be leading.

BOT holds P1
VET up to P2
VER up to P4#BahrainGP pic.twitter.com/MS9epcM6Zv

The leading trio of Bottas, Vettel and Hamilton began to pull away from the field with the leaders being separated by just half a second.

It was clear that Vettel had the pace to overtake the leader Bottas and opted to be the first of leaders to make the switch to the super-soft tyre.

Max Verstappen was aware of Vettel's pace and swiftly followed Vettel into the pits. Before we could see was Verstappen could do on the option tyres, the teenager fell victim to  brake failure that ended his race just 12 laps in

Despite seeing that Vettel clearly had the pace on the super-soft tyre, Mercedes decided to keep both Bottas and Hamilton out on track. Mercedes waited three laps longer to bring in their drivers after the safety car was deployed after Carlos Sainz and Lance Stroll collided at Turn 1.

Moments after VER hits the wall, the race is over for STR too

Mercedes pitted both drivers with Bottas ahead of Hamilton. Hamilton knew that he needed a bigger gap to his teammate to make sure that he was not held up in his pit box.

Hamilton slowed down to build a gap and buy himself sometime much to the annoyance of Daniel Ricciardo who was behind the Mercedes driver and help up Ricciardo.

Hamilton was hit with a five-second penalty. Not only did Hamilton receive a penalty but he also lost out to Vettel and Ricciardo and exited the pit lane in fourth place.

After falling behind, Hamilton knew that he had to try and get passed Ricciardo as soon as he could and did so at Turn 1 at the restart. Bottas almost took the lead back from Vettel however it was the German that came out on top as Vettel hung Bottas out to dry at Turn 3.

After surviving his battle with Bottas, Vettel set about building his lead and stretched the legs of his Ferrari. Vettel's lead from Bottas stood at 6 seconds but Hamilton was on the charge.

Mercedes had an issue on the grid with the tyre pressure's with Bottas' tyres. Mercedes asked Bottas to let Hamilton by. Hamilton assured the team that if asked he would let Bottas back passed come the end of the race.

With Hamilton on the charge, Vettel stopped for the soft compound and emerged in 3rd place and 17 seconds behind the then leader Hamilton.

Hamilton made his final stop on lap 41 and found himself 9.5 seconds behind Bottas. In just four laps, the three-time champion managed to trim the gap to his teammate to just five seconds.

Just two laps later Hamilton made the move on Bottas and tried to catch and then pass Vettel.

Despite all the encouragement from the team and Hamilton pushing as hard as he could, ultimately the penalty cost Hamilton the chance of a second win of the season and finished just 6.6 seconds behind Vettel.