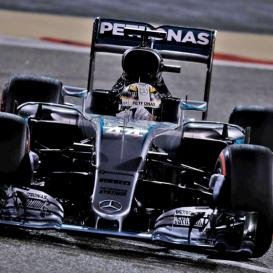 Lewis Hamilton left it late, but overcame his teammate Nico Rosberg in a last lap which saw the three-time World Champion go quicker than Rosberg in every sector and set the fastest ever lap ever seen in Bahrain.

After Ferrari topped the final practice session on Saturday morning, Mercedes are aware of the pace set by Sebastian Vettel and Kimi Raikkonen, but the Ferrari pair couldn’t follow up their impressive practice times, as they started behind Hamilton and Rosberg in 3rd and 4th.

Early on in Q3, an error on the last corner for Hamilton meant Nico Rosberg held the initiative, with Vettel and Raikkonen half a second behind.

Hamilton narrowly avoided having his 51st career pole taken away from home after reversing in the pit line, despite being called to the stewards, the pole-sitter was only reprimanded for his actions as the FIA suggested ‘he was given no clear instruction on where he should park.’

The new Qualifying format again came under scrutiny, as late on in Q3, only the Mercedes and Ferrari’s were out, followed by a long silence on the track.

Early before the race on Sunday, a decision was made not to revert back to the 2015 Qualifying system, “despite all the teams wanting to do so” said Toto Wolff.

After Fernando Alonso crashed out in Melbourne, the Spaniard was absent from the race weekend under Doctors advice. His replacement, Stoffel Vandoorne out-qualified his teammate Jenson Button, finishing in an impressive 12th position. Button later told the BBC “the newcomer did a good job and I didn’t.”

Vandoorne, who had only driven the car for the first time in practice on Friday reflected on his qualifying success by suggesting “Jenson is a good benchmark for me, he is a World Champion” – also speaking to the BBC”.

Elsewhere, Daniel Ricciardo built on an impressive start in Melbourne to qualify 5th on the grid, as he will look to maintain a high mid-field finish once again.

No decision had been made about the future of qualifying format, but many are hoping the new system will be scrapped, and reverted back to the 2015 qualification process.