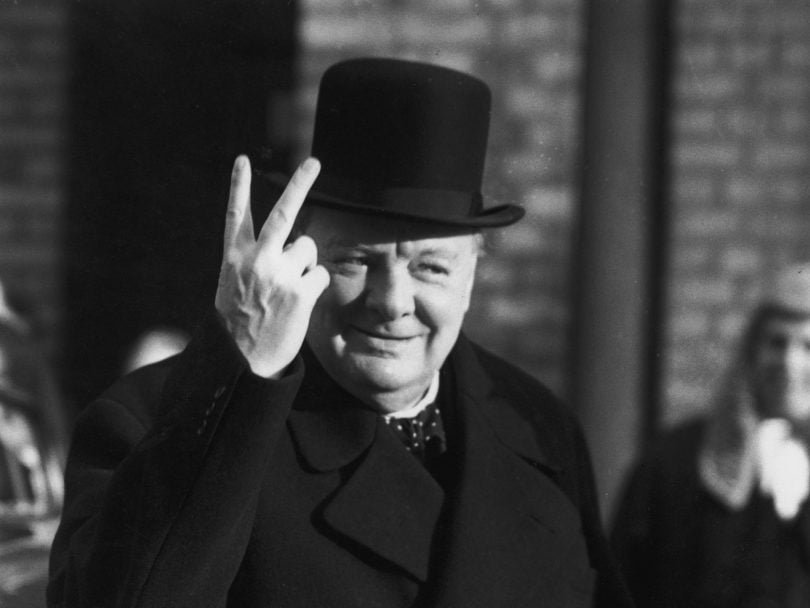 But, they say ‘make hay while the sun is shining.’ Since it’s not the 1740s, and no-one makes hay anymore, no-one’s been doing that. People have, however, been exploiting the sun with long afternoons spent in pub gardens. With the good weather enduring, the witty anecdotes, pocket wisdom and factoids you spent the winter months preparing will probably be running low. A reserve that should have taken you through to mid September with idle pub chat has been depleted by this thoughtless heatwave mother nature has laden us with. Toilsome times.

Anyway, here’s one about Churchill having a piss.

Two men stand at a couple of urinals somewhere upmarket and posh. Probably in the south of England. One of them finishes the job and heads for the sink. This man is an old Etonian. He washes his hands, and sidles towards the towel. As he sidles, the other man finishes the job, ignores the sink, and heads for the door. This man is Winston Churchill. He was the Prime Minister of Britain during a period some historians call “The Second World War”. Some American historians call it “Double U Double U Two”. As Winston approaches the exit, the old Etonian cries out in an old Etonian drawl that I lazily presume is not too dissimilar from Jacob Rees-Mogg’s.

‘At Eton, they taught us to wash our hands after using the toilet,’ he says.

Churchill takes a puff of the cigar in his left hand. He exhales. And speaks.

‘At Harrow,’ he replies, ‘they taught us not to piss on our hands.’

With that, Churchill takes another puff of that cigar that he miraculously managed to light up between the urinal and the door and leaves. The uncompromising approach that won him and the Western World “The Second World War” – except the bits of the Western World that weren’t on our side – had led to yet another victory.

That quote, however, falls largely below the radar. It has been ousted in the public consciousness by such popular gobbets as ‘never, never, never give up’, ‘if you’re going through hell, keep going’ and that ‘we will fight them on the beaches’ sound bite. The ‘I don’t piss on my hands’ morsel displays a more down to earth, and wholly less preachy Winston than the man we are taught about in our primary schools.

Unlike the sombre character that we envisage with a cigar in hand, eloquently sipping a glass of brandy whilst pouring over the latest war report, this Churchill is more fly away and care free. This is a man who would go on to inspire a legacy few have matched. This is a man who was honoured with the creation of Carlsberg’s Special Brew on a visit to Copenhagen.

‘If I were your wife, I would poison your coffee,’ she quipped.

‘And if I were your husband, I would drink it,’ Churchill replied.

A cracker of a retort. He could have easily told her to ‘fuck off’ and been done with it. But, Churchill would once again subdue an opponent with a quick tongue. After years of excess in smoking, drinking and eating that may well have been the only quickness Churchill had left in him.

Except, according to Boris Johnson, this exchange never happened. He wrote a big book on Churchill, so I suppose he would know. Unfortunately, this insight renders the last bit of the article not in the least bit useful. You can’t honestly use it in pub anecdotes – which is really the only use Churchill’s quotes have now the war’s over – without referencing that disappointing disclaimer before finishing. At which point, you’ll find a chorus of laagered groans fired in your direction, as the chaps at the bar turn their attention back to their pints.

Now, this makes me doubt the legitimacy of that first, toilet Churchill quote. Who would have released that exchange to the world outside that toilet? I can’t imagine the old Etonian publishing it in his memoirs. Would Churchill have published the confrontation in his? I doubt it, but I’ve done absolutely no research into it. Lazy presumptions are king.

I’ve been using the toilet quip in pubs for years. Never mind, I’ll probably continue using it. When did truth have anything to do with anecdotes told in pubs?

A man once told me he’d seen Prince William head-butt four people in a bar.