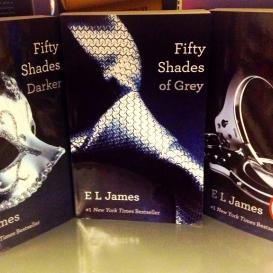 Twitter users all over the world took to the website last Monday to publicly humiliate EL James, the author of Fifty Shades and new book Grey – Fifty Shades from Christian’s perspective – using #AskELJames.

The hashtag, which was used to set up a live Q&A session between the author and her fans, was soon taken over by people questioning the relationship between Anna and Christian and the theme of abuse, as well as criticising James’ apparent lack of understanding of the English language and the fact the story was inspired by Twilight.

#AskELJames How much money does a partner need to earn for them to be ‘romantic’ instead of abusive? Asking for a friend.

It feels easy to blame James or her publicist for making such a huge mistake in the first place. Everybody knows that social media is the worst place to be shamed (or bullied) for the choices you make, and when the internet has been so vocal about its dislike of EL James’ work, why would she think a Q&A on such a public place would go down well?

To say she had it coming is an understatement, I’m sure even those who adore James’ books could have anticipated the outcome.

Maybe what happened is more of an indication of the way social media has worked against EL James in order to tarnish the way the public receives her—and her work—altogether.

#AskELJames do you find it ironic that you write as if someone has tied you to a chair and forced you to?

How do you feel that your book has reinforced the horrible slander used by men that women want to be forcibly-dominated/raped? #AskELJames

As an avid user of social media such as Twitter and Tumblr myself, I was very aware of the problematic way that the Fifty Shades books presented Christian’s manipulative behaviour and his lack of concern about Anna’s consent. Due to the way the trilogy was discussed on social media, I have never wanted to pick up any of the books and start reading because I assumed I already knew how awful it was going to be. I wonder how many other people have had the same reaction?

Despite being grateful for the warnings that these sites have given me about these books, they have definitely ruined the way that I—and I’m sure others—perceive Fifty Shades of Grey.

There’s no denying that #AskELJames was a publicity idea gone wrong, and I’m sure her publicist will think twice before setting anything like this up again. But what happened does shed light onto the way that social media has blown up Fifty Shades, making it a huge media story to be picked up on. And whether this is a good thing or not is maybe something we should consider asking EL James in her next Q&A session.