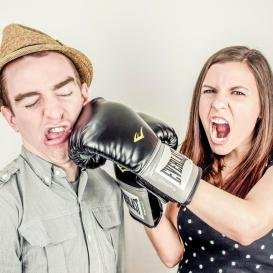 As a final year university student trying to juggle the stress of uni, a part-time job and a relationship it’s easy to wind up tired, irritable and grumpy. When one person endures this much stress and exhaustion it has to come out somehow and unfortunately for my other half all my anger and emotion is directed towards him. This leads me to my question are arguments healthy in a relationship or does it mean they’re destined to fail?

Growing up, arguments and disagreements were part of all my relationships. Whether it be my mum, sister or partner. But as I’ve got older I have come to realise that they are not necessarily a bad thing. We all get angry from time to time and spending every day with one person you’re bound to have your differences. After all, you can’t agree on everything and you definitely can’t please everyone all the time. Everyone needs a way of letting off steam and letting out anger and that’s what the people closest to you are for, because you know they’ll never leave and no matter what they will always love you. Arguments may not be the most pleasant of situations but they are a part of life and they are most definitely part of a normal, healthy relationship.

Sometimes, when two people disagree on something you need to come to blows in order to resolve it. Even if it doesn’t always get resolved, the thought of losing someone in the heat of that moment makes you realise how much you need them and how much you love them, especially if it’s a boyfriend or girlfriend. Arguments can serve as a great way to remind us of that.

If we all went through life scared of what arguments could do to our relationships, nothing would ever be resolved. In past relationships, I always deemed an argument as a bad thing and I was too scared to say anything at the thought of losing them. Instead, I let the anger build up inside me until it all came out when it was too late to fix. Now I’m with my current partner, I have accepted arguments as a part of our relationship but somehow it’s the most communication I’ve ever had. Rather than ignore our feelings, we address them, and even though that sometimes means we’re shouting at each other, every problem we face is dealt with and then forgotten, which in a strange way unites us. In never having an argument you end up isolating yourself from that person because you feel like they are constantly against you. Everyone has a habit of making things worse in their own mind and in not talking about our issues it only makes that worse, which is when the doubt builds up. Not only that but we all know when there is something not quite right with the person we love. If nothing was ever said it only creates distance and space. In sharing issues within your relationship, even that means shouting at them, you can resolve them together which only brings you closer.

Take a moment to rest and contemplate.

That doesn’t mean to say, though, that forever shouting at each other is a good thing. Arguing is one thing but knowing when enough is enough is another. Whenever I argue with someone I get angry, I shout but then I walk away. Having a five-minute breather means I can calm down and rationalise the situation and see it from the other point of view. It is this that sets up the basis for resolving issues. After the argument comes the talking about it, which is the hardest thing in relationships. We’re all good at shouting but not all of us can open up about our feelings. It is important that after every argument, you sit and think about the points that both of you have made and then talk about it. This is what brings you together, makes you stronger and what ultimately makes your relationship work.

Communication is everything and sometimes an argument is the only way to get that. Disagreements in a relationship should not be seen as something negative but a healthy way of expressing feelings and working out your differences as a couple, together.