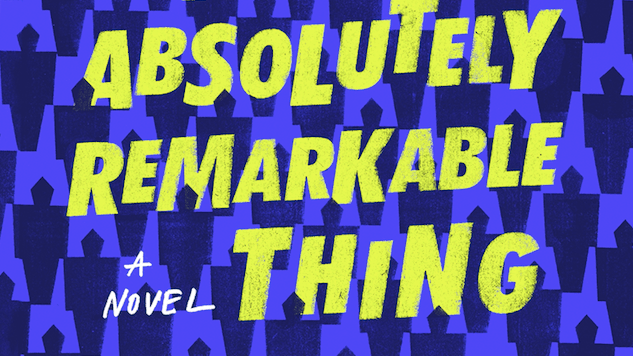 An Absolutely Remarkable Thing, a novel by Hank Green, recently hit the shelves on September 25, 2018, and fell into the hands of avid readers and longtime fans of Green. In a short amount of time, it not only became an instant success but also joined the New York Times Best Seller List.

Who is Hank Green?

While this is his first novel, Green is no stranger to fame. He is best known through his work on YouTube, “Vlogbrothers,” along with his brother John Green. He has also co-founded VidCon, a conference dedicated to online videos, and DFTBA Records, a label company that also sells merchandise for famous YouTube stars. Green’s first novel is also my introduction to him, so I went into this book without knowing his previous works or what to expect. What came out from it was a book I couldn’t put down, and a heroine I wanted to succeed in the end.

We start by meeting April May, a 23-year-old art student graduate who’s trying to establish herself in New York. One night, after taking a walk around the city, she runs into a large robot statue that’s described as looking like a “Transformer.” Seizing this opportunity to be the first to upload a video online, she contacts her best friend and college friend Andy Skampt to bring the film equipment. The duo makes a quick video and names the unknown sculpture Carl, and then upload it online.

After a good night’s rest, their lives are changed forever. Not only does the video go viral and their names become prominent overnight, they soon find out that there are 64 “Carls” all around the world. Where did these sculptures come from? How could they appear out of nowhere? Are they part of the human race or another life form?

Many of these questions arise as April learns to handle becoming a social media and overnight celebrity. We dive in her journey trying to solve the mystery behind the statues and handling her newfound fame.

Lots of great lessons in @hankgreen‘s An Absolutely Remarkable Thing, but I think the biggest is that extraterrestrials have great taste in music.

April May is a wonderful protagonist. She’s a bisexual college graduate who has a relationship with her roommate Maya. Her sexuality does come into play for the spotlight and Green does provide an insight of struggling with her bisexuality along with fame. She relates to many current college graduates trying to pursue their dreams while trying to make a living in a tough economy.

Also, for many who strive to become famous or a voice on social media platforms, this is the book for you. Green brings his experience with being a celebrity and a YouTube personality into April’s journey. We see how she handles interviews, reading the variety of comments about her online, trying to represent herself on camera while balancing her personal life, and how it affects her health and her relationships. April also works to solve the mystery behind the Carls, which keeps us at the edge of our seats with each new clue that is revealed. We get a view of how beautifully humanity can unite, or how it can divide over controversy. Through it all, April is human, sensitive to it all, but strong at the same time.

There are moments where we just want to slap sense into April, as she makes poor decisions on camera and with her loved ones but, at the same time, she’s more relatable because she’s not perfect. She struggles as we all do, and to go from an average woman in New York to a celebrity of a worldwide phenomenon would be a challenge for anyone. She also carries the readers through her wits and humor during the story.

April’s friends include her college best friend Andy, her girlfriend and roommate Maya, her loyal assistant Robin, fan and scientist Miranda, the villain you love to hate Peter Petrawicki, and many more. While they all have completely different personalities, they coincide with April’s story. Green does a phenomenal job allowing the reader to feel the impact of April’s sacrifices and mistakes on her friends, while encouraging to still continue to root for our heroine.

For anyone interested in picking up this novel, the book does end on a cliffhanger, which can be upsetting to many readers. Green has a two-book deal signed on, so a sequel is still a possibility. The book is available both in physical and audio adaptations, narrated by Green himself and by Kristen Sieh.