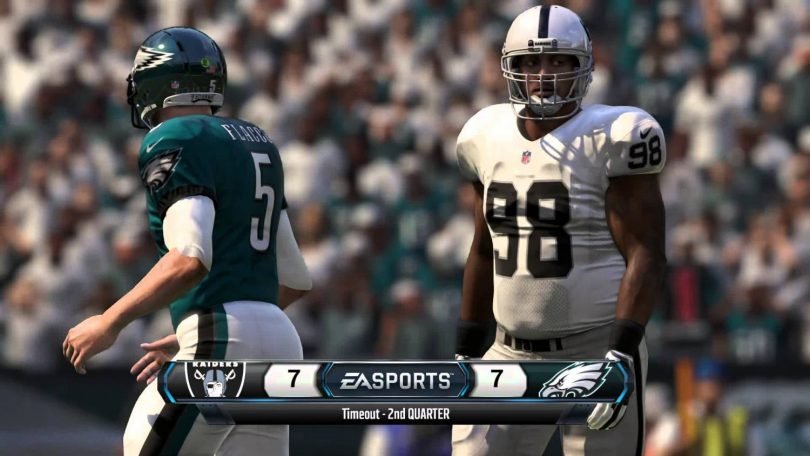 We also got the chance to talk to gameplay designer and former Washington Redskin Clint Oldenburg at the event, hosted by EA at NFL’s UK headquarters, and you can read what we thought of the new game here.

Do you think football could become a mainstream sport in Britain?

“That’s the hope. Americans and British people are different, but not that different so I think people here would enjoy football if they understood what they were watching. That’s what I’m doing, trying to help people here understand and enjoy football.”

Would a London-based NFL franchise work?

“I think it would. The main problem we’d have right now is making sure that team isn’t at a competitive disadvantage relative to the US teams. There’s also a lot of international rules and regulations to sort out, but for sure it could work.”

Do you think we could see teams in other countries as well? Canada, or Mexico?

“I don’t think Canada or Mexico. If there’s a team outside the U.S., right now it’s gonna be in London. There’s a huge fan base in Germany though. We want to get some games played out there too and drum up support. A lot of fans in China too, everyone wants a piece of China right now.”

How important is Madden? What impact do you think it has?

“It’s a really fun game, and a great tool to learn football. It’s also a fantastic way for people who can’t play football to be good at it. You see people who’ve never played football that are amazing at Madden.”

How has the game progressed?

“It’s crazy right now. They incorporate everything on the field these days. I used to be great at Madden, not so much now. It’s so realistic though, I know some players use it to learn the game better. I always learnt from playing.”

Were you ever happy with your rating in the game?

“I think one year it was okay, but everyone looks at their ratings and says ‘come on, that should be higher.’”

Who’s going to the Super Bowl this year?

“Giants! I don’t know who they’ll be playing, but Giants are gonna win the Super Bowl.”

What do you think is the biggest change this year?

“It’d have to be the new defensive AI; it makes a lot of difference. The new commentary team is big too, the access we’ve got to these guys and the quality of the dialogue is unprecedented for us.”

What do you think of the changes to Franchise Mode?

“The new character customisation is great, it’s a lot deeper and more impressive than previous games, although we know we’re still a little behind other sports games in that regard. Play the Moment is fantastic too, the shorter games make it a lot more accessible.”

Won’t the Play the Moment take away control of your team in games?

“Not at all. You can still choose your playbooks that the team will run, and you can jump into the game from the simulation at any point to take control.”

Which we very much appreciate. Sincere thank you for being a loyal Madden fan! https://t.co/whmZM2CUh6

This year’s entry to the FIFA franchise is featuring a new story mode. Do you have any plans for that sort of thing in Madden?

“We’re a little behind other sports franchises with game modes. Although it won’t be in 17, we’re definitely interested in that. It’s something we’re looking into.”

And what about Ultimate Teams, we’ve not really talked about that. Any changes you want to mention there?

“Actually we’ve made a big change to Ultimate Team, we haven’t talked about it much. The play style system that was there previously, you know how players suited certain schemes, is changing to a chemistry system. You increase the chemistry level in your team to upgrade players, units or the whole team. It’s almost like an RPG [role-playing game] progression system.”

And what about the tutorial mode?

“We’ve updated and added to that to teach you about new zone coverage, gap plays and the other new mechanics. It’s important for us that new players can get into the game.”

Osi Umnenyiora was speaking at a preview event for EA SPORTS Madden NFL 17 ahead of the game’s August 25th release. To find out more information, and to discover the latest features in the game, head to https://www.easports.com/madden-nfl”