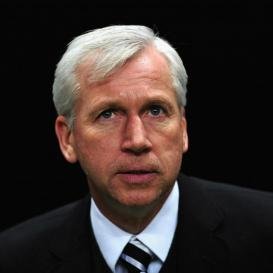 This week will see Alan Pardew celebrate four years (joined 9th December 2010) in charge of Newcastle United, it’s been a mixed bag, four seasons that smack of inconsistency but as he enters his fifth year – the 52-year-old has a real opportunity to put his name in the history books for all the right reasons.

Guiding The Magpies to 5th back in 2011/2012 was a superb achievement and earned him an unheard of 8-year-contract but a 12th and 16th place finish either side of that plus a 10th place finish last season,  means that there have been more bad times than good.

That ludicrous incident with Hull City’s David Meyler,  getting trounced by three goals are more by most teams at one point or another in the Premier League and a terrible win record between January 2014 and last month all leave stains on Pardew’s time at St James Park.
And let’s not forget the dismal Tyne Wear Derby record: one win in six against Sunderland, becoming the first Newcastle United manager to lose three in a row since 1921, and conceding eight while doing so.

When Alan Pardew’s side have collapsed they have done in fantastic fashion.

But when he’s got it right:  a 5th place finish, quarter finals of the Europa League and the fantastic results against Chelsea (3-2, 2-0, 2-1) and Manchester United (1-0, first victory at Old Trafford in forty years) as-well as some fantastic, albeit, sporadic performances over the years – have left fans thinking what if?

What does December hold?

And as Christmas 2014 approaches Alan Pardew has a real chance to prove he’s a top manager.  On the back of a fantastic 2-1 victory over what were an unbeaten Chelsea side – Pardew takes his side to a low on confidence Arsenal side where a win could take the Magpies into the Champions Leagues positions.  After that comes the League Cup quarterfinal vs Spurs, a side just like their North London rivals who are bereft of confidence and arguably there for the taking.

If Alan Pardew can maintain the great team performance that gained the Magpies three points against Chelsea –  one filled with passion, commitment and counter attacking football that dreams are made of –  there is no reason why Newcastle United can’t be on cloud nine just as North East rivals, Sunderland, embark on Tyneside for the Christmas derby.

The Premier League looks set to be an open competition more – West Ham and Southampton enjoying the current falling standards of Arsenal, Liverpool and Manchester United  – with Newcastle United not far behind,  Alan Pardew really has the chance shut up his critics once and for all.

There are of course still issues – injuries are starting to set in (Tim Krul and Rob Elliot are both out until 2015) –  but on the other hand  Alan Pardew is going to have to face the dilemma of whether to field exciting youngsters (Mehdi Abeid/Rolando Aarons)  or stick with experience (Cheick Tiote/Yoan Gouffran).  The latter, some fans would suggest that is a problem that Alan Pardew will fail to deal with adequately.

And of course, as the January transfer window approaches fans will be wary of the team’s best performing players – Moussa Sissoko for example – being sold to a Premier League rival.

But if Alan Pardew can get his head down and deal with the problems instead of using them as an excuse as-well as keeping his own feet on the ground – he is after all partial to a bit of vanity –  then he could have a real enjoyable 2015.