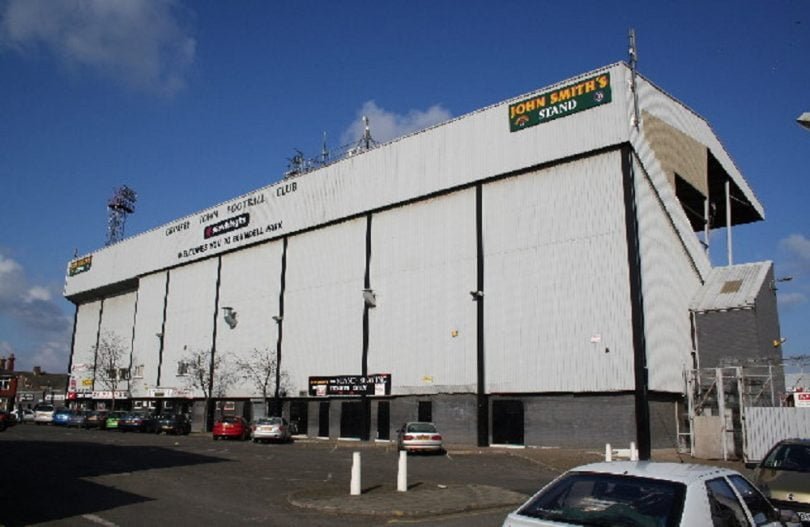 You really learn what it means to be a football supporter in times of great struggle or strife. Grimsby Town has been in my family since the late 1940s when my grandad first appeared, Teddy Boy’d up on the terraces of the Pontoon Stand as the Mariners exited the English top-flight. A place of no return.

His story is one of re-elections, near-liquidation and, whisper it quietly, Mike Lyons. My story is just as disappointing, frustrating and fragmented. And in a third of the timescale. The post-Omar Bogle days were always going to be tough. You never like admitting that you have, essentially, a one-man team but he was the talismanic centre-forward to our chances of rocketing up the Football League, having finally come back after six years in the mucky and nettled wilderness of non-league.

Gone were the days of Guiseley, Altrincham and *shudder* Chasetown in cup competitions that few people on the banks of the Humber had either heard of nor cared a sight for.

Black and white stripes hardly spells out ‘cheerful, forward-thinking footballing innovators’, it’s more a case of grainy Pathe newsreels of better days and Bestall, Betmead, Tweedy etc. For now, though, it was Disley, Pearson and McKeown who were the nails on which Town fans dreams were hanging.

Morecambe away, a filthy afternoon, filled with about as much joy as you’d expect in late February at the seaside. The only bucket and spades I saw were the ones collecting the drips from leaking old arcades and spades left frozen and abandoned on sodden building sites. All in all, the Lancashire coast cut a drab, depressing figure. Grey and cold. Kinda like Cleethorpes. I felt at home, in all fairness.

Getting to the unnecessarily named Globe Stadium was a nightmare. I ended up in a taxi, soaking wet and steaming with the rain evaporating into the car’s heating, with a few fellow Mariners. Tipsy, I paid a fiver for a ticket (madness in today’s game) and found myself standing at the back of the stand, old-school terraces belying the exterior image of the new-fangled ground. I watched as Morecambe scored within what seemed like the first ten seconds. Game over, then.

Like I said, you really learn what being a supporter means in times of great struggle or strife. The shocking weather was matched by the shocking football. Marcus Bignot’s tactics were heavily criticised during his short spell as manager and this was a classic example of Bignotomics being bettered by a Bentley. Jim Bentley, that is. His red army stifled the midfield and the foul atmosphere of lukewarm pie mixed with the slanting sleet of the wintry seaside made for a real grim day out. My first solo away day adventure.

Opportunity through a game

It's not the result that mattered. Or even the diabolical defending. The long trek through glistening streets trying to find the train station that resulted in me asking a police officer which way I was supposed to be heading.

“Trern steyshun? That way,” the Lancastrian accent a totally impenetrable language to my guttural Grimbarian. It isn’t any of that that really matters. Football had given me, a student with a history of long spells of unemployment, signing on, general despair and a habit of bunking the train, with the opportunity to travel and see the world. Even if this part of the world was rainy and looked like it had seen better days.

That was what I really believed in – that football was a release, a distraction from whatever unfortunate circumstances you find yourselves in. You go and watch those eleven men, not too dissimilar to you or I (unless you like the money machine of the Premier League) kicking a laminated ball into Row Z at the weekends. It quickly becomes your identity. The one thing that both separates you from the next man in the jobcentre queue and also integrates you as part of the tribe, part of the group. There has been many a time when I’ve entered the mass of Mariners fans in the Pontoon stand and felt like a friend to all of them.

As a student at university, I never had the chance to meet fellow Grimsby Town supporters. Which is a shame because, contrary to the opinion of a lot of the country, there are many brainbox young people from the town that go on to bigger and better things.

Football: For the generations

So a 1-0 defeat on a dull afternoon of late trains, delays and cider might make you question just what on Earth you travelled all that way for; but it also makes you realise, like a footballing epiphany, that this is what my grandad had experienced at my age. Trips to slightly more local places like Mansfield, Sheffield, Lincoln or Doncaster to watch the team get pummelled from start to finish and yet still go back for more each time. It’s that unique sense of being ‘in it together’ that makes you carry on.

Like Dale Winton used to say, smiling cheesily at the camera, “You gotta be in it…to win it”. Sound advice from someone who was so caked in fake tan that you had to wear sunglasses just to look at him.

If I said I’d give the footy up everytime Grimsby Town were on the end of a spanking, I wouldn’t set foot outside my front door ever again. I’d become some sort of sporting agoraphobic. Scared to walk down Cleethorpe Road in case some slick, attacking side came and tore Town a new one. It just becomes you. This part of you.

Jegsy Dodd, a poet from Merseyside, once said that “only football can truly break your heart.” Yet, that damp and dark trip to Morecambe didn’t break my heart, it filled it with every piece of banter I heard, every snide and knowing comment from fellow fans about this Brave New Bogle-Free World.

Apart from the blocked nose that I picked up the following day and the nice hangover that greeted me that Sunday morning, I loved every minute of it.

Football is for the generations. It runs through families, divides husband and wife, causes debate and heated exchanges on playgrounds up and down the country; but it’s ours.

Just over a month later, Marcus was made redundant and Russell Slade took over at Town. Long live the good ship Grimsby Town Football Club and its motley crew of avant-garde fandamonium and avant-a-clue tactics.