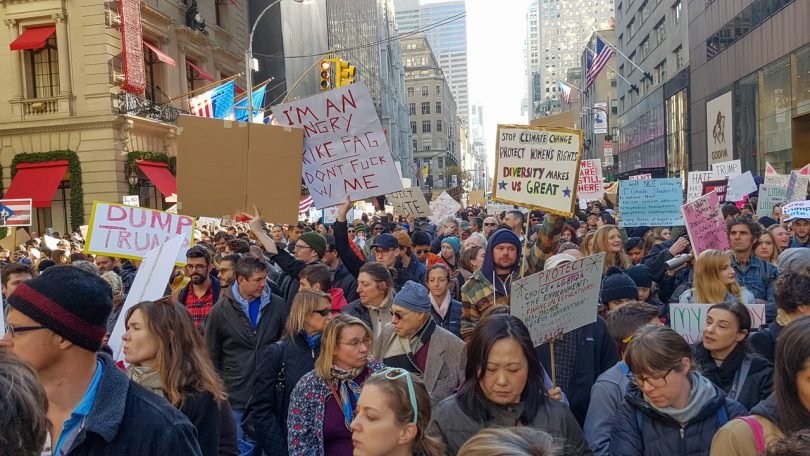 Both during his campaign and in his first days as President, Donald Trump has made no secret of his contempt for the mainstream media.

Yet, amid the cries of "fake news" and the rumours he may evict the White House Press Corps from 1600 Pennsylvania Avenue, a more worrying narrative is emerging about the leader of the free world's attitude to the freedom of the press.

A more worrying narrative is emerging about the leader of the free world's attitude to the freedom of the press.

During the protests at Trump's inauguration on Friday 20th January, more than 200 people were arrested on the charge of "felony rioting", punishable by a ten year prison sentence and a $25,000 fine. Those arrested included seven journalists reporting on the protests, detained by Washington D.C. police due to their proximity to the demonstrations.

Mass arrests have happened during protests in D.C before, yet as one experienced lawyer told the Washington Post the difference this time is the severity of the charges being handed down to demonstrators and reporters alike. On previous occasions those present have merely been charged with misdemeanours or given a citation and then sent home.

Concerns have also been raised about the treatment of journalists by police on the day. One reporter, who identified himself and asked permission to pass through the police line, was reportedly struck multiple times by officers before demonstrators, legal observers and journalists alike were eventually corralled into one large group and arrested.

Four reporters (two local correspondents affiliated with the broadcaster NBC, a US News magazine reporter and an independent journalist) were eventually allowed to leave. Among the seven arrested are reporter Aaron Cantu who has written for VICE and The Intercept, Vocativ producer Evan Engel and RT investigative journalist Alex Rubinstein. Both Rubinstein and Engel identified themselves to police according to their employers.

Rubinstein tweeted that he was blinded by a flash grenade launched by officers and the crowd was encircled while he couldn't see. Shay Horse, a photojournalist who covers social movements, told US News that all he had done was "take photos". A Vocativ spokeperson told the Committee to Protect Journalists (CPJ) that Engel's camera and mobile phone had been seized by police, and that they would "vigorously contest the charge". In the UK, the National Union of Journalists has called on its' members to tweet condemnation of the "disturbing" arrests directly to Mr Trump as an expression of solidarity with their colleagues abroad.

Here is the flash grenade they used that blinded me and left my ears ringing. Cops encircled crowd when I couldn't see; arresting everyone pic.twitter.com/bL2ulgv9DR

Some critics have accused many mainstream US news outlets of remaining silent on the issue of press freedom and only focusing on the violence caused by demonstrators (and a burnt limousine), in spite of previous concerns about how Trump could treat journalists.

what the headlines would look like if these mass arrests happened overseas: pic.twitter.com/Vakm8k9scl

One attorney has now filed a civil lawsuit against D.C police officers, accusing them of indiscriminately arresting more than 50 lawyers, medics and journalists. In a signed affidavit seen by the Committee to Protect Journalists, a New York based advocacy group, police claimed they had "cordoned off" a crowd of more than 300 people wearing bandanas or masks and vandalizing property.

Carlos Lauría, Americas programme director for the CPJ, warned that the charges were "inappropriate" and sent a "chilling message" to anyone covering future demonstrations. Amid the growth of alternative facts and the increasing prominence of claims made on social media, the charges certainly convey a worrying message about journalistic priorities.

At an event at the London School of Economics, Brian Stelter, Senior Media Correspondent for the broadcaster CNN, accused Trump and his aides of a broad effort to "delegitimise" the US media and posing a "danger" to journalism that has not existed for a long time. With the growth of fake news and the hostile language adopted by the new administration towards some establushed media outlets, the journalism environment is certainly becoming more complex.