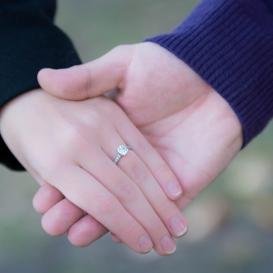 Some people have their proposal planned out far in advance. Some know how it will go before even meeting the person they will ask to marry them. Proposals range from the standard down-on-one-knee type, to carefully arranged fireworks in the night sky while ‘Everything Has Changed’ is performed by a flashmob. It can be an intimate affair, or it could be at Disneyland. The wedding itself could be in a registry office, or a church, or on a hillside.

There is a supposed politeness, and a misguided one too, trickling through these customs. The wage gap has yet to close, but women do have better opportunities for employment than a few decades ago. Paying for dinner made some sense when the man was guaranteed to be the one raking in the cash in a heterosexual couple.

@HeartofFire I’m all for feminism and females making the first move and whatnot but for some reason I just couldn’t propose.

Now, stay-at-home dads are no longer an anomaly, and women are heads of the household both in terms of authority and income. There is a balancing act happening across western society (admittedly, it’s happening far too slowly) where the man no longer has to take the lead or dictate the steps of a relationship. Women can, and have always been able to, handle themselves, and that is shining through in 21st century relationships.

2016 is a leap year. Alongside this causing Christmas to be one sleep further away than usual, it also means that so-called ‘thinkpieces’ will be all over gossip mags and broadsheets alike about the one day of the year it is customary for women to propose to men.

@HeartofFire I don’t think I could, like I still see marriage as very traditional so I think the man proposing is a part of the tradition

We are horribly traditional when it comes to marriage. Equal marriage laws in the UK are excellent advancements in the way society respects those outside of the heteronormative structure, and it will be a joy to look at patterns that emerge from those marriages regarding proposals.

It’s not just the proposal though – it’s still rare for a man to take his wife’s last name. Research from the University of California, Santa Cruz, saw that three out of five men preferred to keep their name, and three out of five women were willing to change theirs. No men showed a preference for women asking them to marry them, with one saying it would be emasculating, and a woman said it would feel “very awkward.”

So while gender roles are slowly being done away with, they are very much alive in traditional heterosexual marriages.

But maybe that’s because marriage itself is traditional. Millennials are marrying less, to the extent that America is facing the largest group of people of prime marrying age ever, and yet the marriage rate per 1,000 people is at a historic low. And so, these statistics will be taken from those who see marriage in their future, while more and more people are considering it less and less.

There are so many approaches to a wedding. For practicing Christians it still holds a large religious significance. To those who have no religion in their lives, it can still be seen as the path they are expected to go down, like a life milestone. The more we do away with tradition, the more the very practice of marriage declines.

And yet, I am a romantic, and my only requirement for a wedding is that there is a ceilidh after the dinner. I have a delightfully dull surname which I would never force upon anyone, and if my wife happened to have a particularly good one, I would happily ask her if we could share it. I do know how I would propose to someone, but if she beat me to the punch, then how sweet that would be that she took the initiative.

But I run in feminist circles, and have requests like “if we have any children, we don’t enforce any gender role upon them.” The only appeal of a marriage is the romantic bombast of the whole thing; a reason to throw a big party, with no desire to come together in the eyes of God or anything of the sort.

Benevolent sexism is still sexism. Placing your partner on a gendered pedestal still creates an imbalance. It is not emasculating to be proposed to by a woman, and yet somehow also the most romantic gesture by a man. A woman is not validated by her relationship to a man, and any relationship she has with one should see her have equal agency as her partner.

And so, to my future wife, propose to me if your heart desires. If I get there before you, I have a good idea for it. If you get there before me, please don’t make too much of a fuss over it. My one request is you know the Gay Gordons.

What do you think of this tradition? Let us know in the comments below!