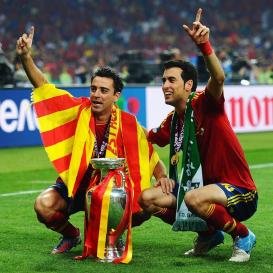 This summer promises to be a popular one for sports fans. As well as the summer Olympics in Rio, the European Championships take place in France, and what better way to look forward to the Euros than experience the best and most memorable moments from the tournament’s history.

Here are our top five:

When Greece squeezed their way into the last eight on goals difference in the 2004 championships, at the expense of Spain, nobody gave Otto Rehhagel’s side a chance against defending champions France. But the quarter-final tie was an open affair, and a disjointed French team were there for the taking.

Charisteas headed home past Fabien Barthez in the second half to secure a semi-final place, much to the shock of the French team and all the fans watching at home. The rest is history, as Greece miraculously lifted the trophy after beating hosts and tournament favourites Portugal in Lisbon.

When England were struggling to hold on to a one goal lead at Wembley against neighbours Scotland in the Euro ’96 championships, it seemed only a calamitous Scottish error or a piece of magic could seal England a win. Up stepped Paul Gascoigne.

The midfield gem was slated by the media for his drinking habits in the run-up to the championships that summer. But he put the critics to bed with his superb solo goal. You know the one. After running onto Darren Anterton’s pass, Gascoigne lobbed the ball over defender Colin Hendry before volleying first time past the Scotland keeper Andy Goram.

If the goal itself was not enough, his celebration answered back to the press that had slated him beforehand. He rushed behind the goal and lay down on the turf awaiting his teammates to squirt their drinks into his open mouth.

Peter Schmeical is a household name in world football, but his claim to fame may have been triggered by his antics for Denmark in the 1992 championships, rather than by his time at Manchester United. He helped his Danish counterparts to the semi finals where they faced a tough Netherlands side which boasted the likes of Marco van Basten and Frank Rijkaard. The latter scored a late equaliser after it looked like Denmark could knock out the favourites, but the game finished 2-2, and eventually went to penalties.

The Dutch were let down by Marco van Basten, of all people, whose spot kick was saved by Schmeichel as Denmark held their nerve to claim another scalp as they went on to win the tournament.

Spain made history to claim arguably the greatest international team as they retained the Euros in 2012 in Ukraine, after winning the World Cup in 2010. Vicente del Bosque’s side eased their way into the final to face an Italian team who had knocked England out in the quarter finals, and looked good take the European crown for themselves.

But the game was more of an exhibition as Spain embarrassed Italy’s defence. David Silva’s early header gave Spain the lead before Jordi Alba doubled it with a blistering run and finish. Italy showed great resolve but the introduction of Fernando Torres was too much for 10 man Italy, who lost Thiago Motta to injury after making all three substitutions. Torres scored and set up Juan Mata to end the tie at 4-0.

Spain’s rampant form meant that they became the first country to ever retain the European championships, can they repeat the feat and win their thrid consecutive cup?

There is something about the bright orange shade and the diamond patterning that really takes you back to the 1980s. And it was in the summer of 1988 when Europe watched as the Netherlands took home the European Championships for the first and only time in their country’s history. But one moment defined the competition.

Pivotal to the Dutch dominance was striker Marco van Basten, who netted a hat-trick against England in the group stages before scoring the winner in the semi-final against Germany. But that was not enough for the front man. The final showdown against the Soviet Union marked one of the greatest goals of all time.

Early in the second half, Arnold Muhren lobbed the ball towards van Basten on the right side of the pitch. Van Basten ran onto the ball and struck a sublime volley that looped and dipped over the hopeless keeper, from a very tight angle. The magical moment gave the Netherlands a two goal advantage over the Soviet Union, and went on to lift the trophy.

It is hard to comprehend that no Dutch magic will happen this summer, as the Dutch side did not qualify for the championships for the first time since 1984.