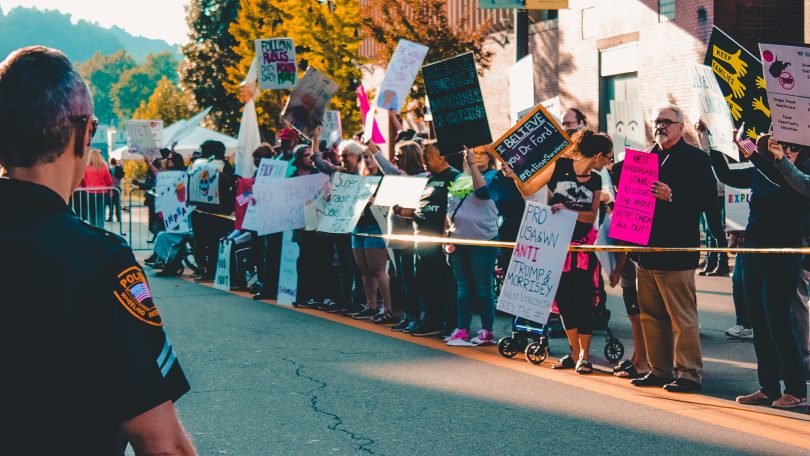 Allowing the citizens of a nation to voice their dissatisfaction at the ruling party is a key ingredient in any democracy wherever it may be.  After all, it is a fundamental democratic principle that governments derive their legitimacy from the consent of the those over which they govern. Throw these maxims together and you have yourself the skeleton of a functional democracy. To this end, physical demonstration has been a useful tool allowing the people to highlight their dissatisfaction at the manner in which things are being run. Yet in the present day, they’re fast becoming tinderboxes for political violence. In the last couple of years, we’ve witnessed a multitude of political demonstrations turn sour. From Charlottesville in the United States to Chemnitz in Germany and in events that are still unfolding, the ‘yellow vest’ protests in France which continue to bring violence and chaos to the streets of the French capital. With increasing frequency we’re witnessing protests degenerate into a primitive form of warfare.

At its core, it would seem there is something unequivocally confrontational about political protest. Especially when accompanied by counter-demonstrators. It’s an exercise as old as time, appealing to our most primal instincts. Two separate tribes squaring up in a fight for dominance. The ‘ingroup-outgroup’ dichotomies that poison discourse elsewhere viscerally manifest in the real world. Physical confrontation draws lines all too clearly between friend and foe, it’s more than a confrontation, it’s the set up for a battle and it feeds on our worst intuitions and prejudices. Of course this innate tendency for conflict is worsened by the often belligerent participants. This should come as no surprise. Political protest, as an activity already conducive to violence, is likely to attract those seeking conflict. High-risk activities attract high-risk individuals. To use an example, the presence of ‘anti-fascist’ activists at the Charlottesville march in 2017 was a surprise to nobody as they are a  group that actively seeks to perpetrate violence. In events that are still unfolding the ‘yellow vest’ protests in France continue to bring violence and chaos to the streets of the French capital.

Of course, not all demonstrations are violent or even turn violent.  But even if one were to discount this obvious proclivity, do they remain a healthy means of communicating our political our inclinations? Whatever might bring somebody to protest it’s unlikely they’ll be able to squeeze the intricacies of their argument onto a slab of cardboard three feet in diameter. Whilst it might be true that cogency can take a back seat when your objective is merely to display indignation, without some kind of grounding in policy protest becomes meaningless. The Women’s Marches in particular in particular have fallen foul of this rule, forwarding a message so elastic as to verge on pure meaninglessness. Yet by attendance, the 2017 event was the largest protest in US history. Why? Because it’s very general opposition to the Trump administration allowed for the easy proliferation of attendees with a diverse range of grievances under one ill-defined banner. It is protests of this kind that are akin to a kind of conspicuous consumption. They visibly show an individual to be doing ‘their part’ but simultaneously relieve them of the burden of actually examining the world, or articulating their grievances. They lack any and all substance.

The sum of these complaints certainly doesn’t mean that there is no place in our politics for public demonstration. The right to protest is and always will be a vital check on our governments. This notwithstanding, our haphazard execution of what has historically proved to be a potent social and cultural tool is damaging its usefulness.  Even if one were to disagree with everything written thus far, it is undeniable that public demonstration is an activity that suffers from diminishing returns. Protests at least in part derive potency from their relative infrequency. Yet currently our ever-growing appetite for confrontation has seen this pursuit deployed as some kind of extension of regular debate, with some less than desirable consequences. An awareness of some of the pitfalls mentioned here, as well as an interrogative eye to recent history, would help the protestors of tomorrow strike a balance between the barbarism of Charlottesville and the impotency of the Women’s March. Our democracy doesn’t need more protests, it needs smarter protests.