The Great British Bake Off concluded last night with over 13m tuning into to watch Nancy Birtwhistle crowned winner of the baking show but where does the viewing figures for this finale put Mary Berry and her bakers on the list of the UK’s most watched TV shows?

The reality is, not very high on the list. Infact the GBBO finale wouldn’t even make it into the top 30 watched UK programmes but there is no doubting the popularity of show with it bringing an average of between 9 to 10m viewers each week.

The 13.3m that watched this week’s antics in the kitchen puts it as one of the most watched programmes of 2014 only beaten by the World Cup 2014 in which over 14m people tuned into watch some fixtures.

Christmas Day 1986 and over 30 million tuned into to watch Dirty Den hand his cancer stricken wife, Angie, divorce papers. The couple who ran the Queen Vic were the cornerstone couple of the soap but with Den threatening to leave his wife, she creates a lie that she has just months to live and he stays to look after her while she takes those final steps to the pearly gates.

But Angie slips up and Den hears her telling a barman that it’s all a pack a lies with everything coming to ahead on Christmas Day: it’s Eastenders at it’s best.

It’s a record that’s only be beaten by one off broadcasts such at the 1966 World Cup Final and Diana Princess of Wales’ Funeral in 1997.

It’s Eastenders again and a huge audience of 28m tuned into watch: well I’m not too sure, because I can’t find a synopsis online! Wikipedia labels it as an episode where Michelle Fowlers tells her battle axe of a mother, Pauline that’s she is pregnant.  While another site has it down as pretty boring episode, who knows? Regardless, BARB (Broadcast Audience Research Board) have it down as the second most popular TV episode ever watched.

The same year and another Christmas Day episode, you can see why BBC and ITV put so much effort into their festive schedules!  This time over 26m people took a trip down to the cobbles of Coronation Street as one of the show’s legends left the street for the final time.  Hilda Ogden arrived in the street in 1964 and remained an important part of the soap until she left – 23 years later. The housewife had fallen victim to a violent burglary early in the year, and decided to leave after being offered a job in Derby as a housekeeper. It remains Coronation Streets most viewed episode.

One of the greatest comedic moments in the history of British sitcom and indeed television, as the Trotters eventually became millionaires.  24.3m people watched the final episode of the three-part special, as Del-Boy and Rodney’s pocket watch – which they thought was a victorian egg time – goes for £6.2m at auction.  It’s a comical and emotional ride and what should have been the final chapter in the Trotter’s story, it’s the most recently dated broadcast on the list. 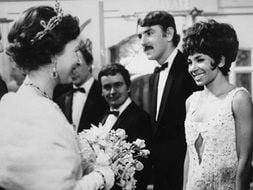 The oldest entry on our list as over 24m tuned into watched the likes Shirley Bassey and Tony Bennett entertain the Queen at the London Palladium.  These days, the Royal Variety show doesn’t get above 8 or 9m viewers but back in the sixties it was the TV attraction.