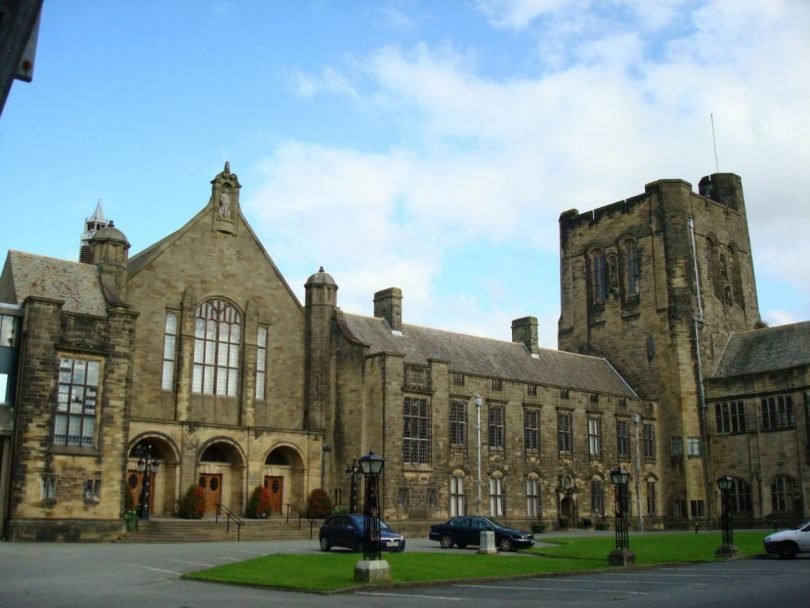 Written by Mattlj92
Bangor University is situated in the not-so-sleepy Welsh city of Bangor. With only 15,000 local residents but more than 15,000 students, Bangor certainly is a student city.
Bangor University is situated in the not-so-sleepy Welsh city of Bangor. With only 15,000 local residents but more than 15,000 students, Bangor certainly is a student city. In a city where you pay 5p for every carrier bag, here are some facts that you might not know:
The Life of Security Cat
Generations of Bangor University students would often find themselves being consoled by stroking Security Cat. Security Cat gained so much notoriety with students that he even became a meme.
When Security cat passed away the University’s announcement received more than 800 likes and 350 shares on Facebook and the RIP Security Cat page has almost 2000 likes.
£45m Pontio Delayed, Again, and Again, and Again
Bangor University’s Arts & Innovation Centre, Pontio, meant that the old Students’ Union had to be demolished back in 2010. Students’ were promised that Pontio would be built well before 2013 and would be a hub of the student community.
Now in 2014 and Pontio still isn’t built. Building work was only started earlier this year, after a string of embarrassing delay. Last week, it was announced that Pontio would be further delayed, not due to open now until 2015.
It’s Entirely Bilingual
Ydych chi'n siarad Cymraeg? Everything in the university, and I mean everything, is bilingual. If you want to put up a poster then it has to be in Welsh and English; if you send a mass e-mail it has to be bilingual. Even everything the University give you is bilingual, including the graduation ceremony (which, in fact, is mostly Welsh).
If you’re going to try and impress people with your Welsh skills though, it’s probably best to avoid popty ping – it’s a disputed word for microwave.
It’s Split By a Hill
The City of Bangor is essentially split into two parts – known as upper and lower Bangor – to get between the two you have a series of steps, hills, and other pathways.
The biggest hill called Glanrafon Hill (but affectionately nicknamed Bitch Hill) is notorious amongst Bangor students and no doubt you will miss a lecture or two because you can’t be bothered to walk up the hill. Even when you do try it, Bitch Hill will leave you looking like a 'wheezy tomato'.
Reaching McDonalds (or Tesco) is a Challenge
Everything in Bangor seems to be about a 10 minute walk away from everything else. Everything apart from McDonalds and Tesco that is. Whilst you can get a cheap bus to the latter, McDonalds is about 1.1 miles away from the Main Arts building.
One day, probably at around 3am, you will attempt the walk to Tesco, and even though it’s less than two miles away from the university, it will feel like you’ve ran a marathon.
Lots of Pubs
And everyone has their favourite.
When students arrive, they often get told that there are more than 50 pubs and three nightclubs for the 30,000 people (approx.). Whilst that may not be entirely accurate, you definitely can’t fail to notice the sheer number of pubs. One 200m stretch of Holyhead Road alone has five pubs. So whether you want a Greek Taverna or an Irish Bar there’s plenty of choice in Bangor.
More than 100 clubs and 100 societies
So Bangor isn’t the biggest university, but one thing it doesn’t lack is something to do. You’ll no doubt be able to find a club or society that runs every day of the week, whether it’s going for a laugh with Bangor Comedy or battling it out in the most fierce Chess battle in North Wales.
Psychology is Massive
If you speak to a Bangor University student, the chances are that they will be studying Psychology. They have around 500 first year students and even though the numbers dwindle as the years progress everyone seems to be a psych student.
It Looks a Bit Like Hogwarts
The Main Arts building is a commanding figure looking down on the city centre and looks a bit like Harry Potter’s school. In fact, RAG Bangor hold a Harry Potter feast in the main hall.
It also has a pretty big old-style library – sadly you won’t use it much.
Visited by the Beatles
Many Beatles biographers say that their weekend in Bangor was the beginning of the end for the fab four. They attended a conference about spirituality at the old Normal College when they found out about the death of their manager Brian Epstein.
Also in Bangor that weekend were Mick Jagger and Cilla Black. Other famous people who have graced Bangor include Oscar-winning director Danny Boyle who attended the University and linguist David Crystal.
What do you think? Have you ever visited Bangor or its university? Any surprising facts? Have your say in the comments section below.